Updated On December 18, 2022 | Published By: Alisha Ghram
Share this
Single 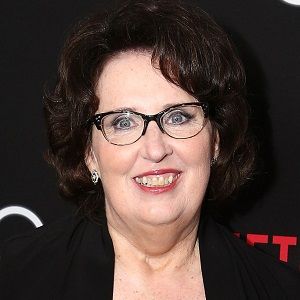 Just go for it. Don't be afraid of trying new things. You have absolutely no idea what's going to present itself to you. Don't be frightened. Just buckle down and do whatever your heart desires.

I've had an experience that... I don't know the right label to put to it if it was an angel or Jesus or what. Nobody knows anything for sure about that, but I know that I had an encounter, and I know that things exist beyond this realm, most definitely. I'm grounded in that.

Everybody wants to shine a little bit, even a wallflower.

What is the relationship of Phyllis Smith?

There is no exact information about Phyllis Smith’s marriage life. When she was playing the role of Phyllis Lapin in the series The Office, she married her on-screen partner Bob Vance in the third season of the show. It was her reel life but in real life, it appears that Phyllis is unmarried.

She has no children and hasn’t been in any of the relationships. She is happily single and is living with her pet cats, Shy Boy, Princess, Little Grey, and Sweet Face, and two turtles, Speedy and Alvin.

Who is Phyllis Smith?

Phyllis Smith is one of the popular actresses who became famous for the role of Phyllis Lapin-Vance on the television show The Office.

The actress is also famous for providing her voice in the 2015 Disney film Inside Out. She has also appeared in a movie named, Bad Teacher in 2011. Smith also gains popularity after playing in the Netflix series The OA in 2016.

The actress was born on July 10, 1951, in The Hill, St. Louis, Missouri, United States. She has European ancestry.

Phyllis was brought up by her mother as her parents got divorced when she was at a very early age. Her mother used to run a small shop in the town and was busy in her own works.

Phyllis was also the second child out of the 2 children of her mother and as her mother was busy in her professional career, she was raised by her grandmother.

Phyllis has her education from the University of Missouri-St. Louis during the year 1972. And she has obtained a degree in elementary education subject.

Between the years 1970, Phyllis Smith worked as a dancer and has started her career. Then she worked as a burlesque performer. Her professional career for acting started when she cast into films and television.  She joins Hollywood California and was working as a casting associate on The Office.

There she receives the chance to perform and was offered a role to play Phyllis Vance. It was a character of a soft-spoken saleswoman who tends to disagree with the pompous office manager Michael Scott. And she was soo much appreciated for the work.

For her performance, she was also awarded Screen Actors Guild Awards in 2006 and 2007. Again with the cast of The Office in June 2008, she appeared on Celebrity Family Feud. In 2011, she appears in the movie named, The Bad Teacher. Moreover, she is seen playing a supporting role in the film Bad Teacher in the year 2011.

The actress has also provided her voice for the character Sadness in the Pixar film Inside Out in 2015. She also receives a good response from there. Lately, in 2016, she appeared in the Netflix series The OA.

As Phyllis has done an outstanding performance, she has also received various awards. She has her name under nine of the nomination list and wins seven of the awards. In 2016, she receives Outstanding Achievement in Voice Acting in an Animated Feature Production for her work in Inside Out (2015).

Likewise, the same year she receives two awards of Behind the Voice Actors Awards. And in Gold Derby Awards, she was awarded Ensemble of the Year for her work in The office in the year, 2007. She also received the Ensemble of the Year Award in IFJA Awards, 2015. Moreover, she gets Screen Actors Guild Awards in 2007 and 2008.

Phyllis must have good earnings and is able to stand independently in their current life. Her net worth is around 7 million dollars as of 2022.

Phyllis has never been any part of rumor and controversy. She isn’t in touch with social media and she seems to have a good professional and private life.

Talking about her dress size it’s 7 US and her shoe size is 10 US. She has dark brown colored hair and blue colored eyes.