Updated On January 29, 2023 | Published By: Paristha Acharya
Share this
In Relation 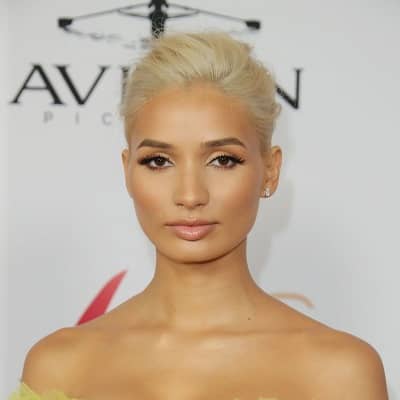 What is the relationship of Pia Mia?

Pia Mia is in a relationship with Nicholas Balding, a producer. This couple started dating since November 2014.

They are often seen together on several occasions and make them look very harmonious with each other.

Who is Pia Mia?

Pia Mia is a Chamorro actress, songwriter, and singer. She is best known for her songs like Do It Again, and Touch.

This singer was born on 19 September 1996, in Guam, the United States with the birth name Pia Mia Perez. Her father’s name is Peter Perez Jr, and her mother‘s name is Angela Terlaje Perez.

She has a brother named Peter Micheal Jude, and a sister Paloma Colette. She also has a half-sister Kandi Rae. There is no information about her educational qualification.

During her first life in LA, this singer worked with renowned singer Babyface. Chris Brown’s record executive and manager Abou “Bu” Thiam introduced her in 2013.

She began working with producer Nic Nac and regularly uploaded remakes to YouTube. Her close friend Kylie Jenner invited Pia for a family dinner. She sang Drake’s song ‘Hold On, we’re Going Home’ which was uploaded by Kim Kardashian on her social site.

Afterward, she gained caught public attention and huge popularity, which gained millions of views. The same year, Mia released her debut song Red Love along with its music video.

She released her debut EP The Gift on 23 December 2013 with eight tracks. The next year, this singer signed a deal with the record label Interscope Records.

Afterward, Perez and ‘Chance the Rapper’ released the song Fight For You for the 2014 movie Divergent. Over the next year, she recorded roughly 100 songs. Mia released ‘Do it Again’ on 4 May 2014, which reached No. 8 on the UK Top 40.

The next year, she followed up her single ‘Touch’ which reached No. 47 in Australia and the UK Singles Chart. She appeared on will. i.am’s single Boys&Girls in 2016. The same year, Perez released the promotional single “We Should Be Together”. In 2017, she created her own label ‘Cherry Pie Records‘.

In 2017, she released her second EP The Gift 2. Pia Mia made her acting debut with the 2019 romantic drama film After. The following year, she starred in a sequel of After, ‘After We Collided’.

Earlier, Perez also appeared in television sitcoms East Los High’ and ‘Happy Together. She has released several promotional singles like Crybaby, Feels Up, Off My Feet, and Doesn’t Get me Started.

Later, on 14 May 2020, she announced that signed with Republic record labels and Electric Feel Entertainment. This artist released her first single ‘Princess’ under her new label on 15 May. Pia confirmed in an interview that her single ‘Hot’ will be featured on her upcoming debut album.

Recently, she announced her first book The Princess Diaries: Sand, Glitter, and Silicone will be released soon chapter by chapter on Wattpad.

How much does Pia Mia earn?

The salary of this singer is under review. Meanwhile, according to some sources, as of 2022, Pia has an estimated net worth of $8 million.

A few years ago, there was a rumor that Pia was getting in the way of Kanye’s relationship with Kim. It was rumored that she was interested to be soon married to West. She defended herself against the rumor.

What are the body measurements of Pia Mia?

Similarly, she has her own YouTube channel with around 1.5 million subscribers and also has her own website.