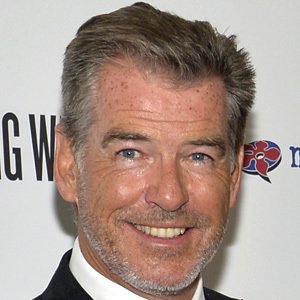 Love means that everything is right with the world. Love and only love. Love means that you are content within your own heart and in the presence of the person that you love, who fills your day and makes you stronger and wiser, and gives you the confidence to go out into the world. Love is just the most beautiful, joyous feeling

I have some wonderful suits in my closet, a lovely car, some refined watches

Pierce Brosnan has been married twice in his life. His first wife was a famous Australian actress Cassandra Harris. They got married on 27 December 1980.  The couple had three children named Charlotte Brosnan, Sean Brosnan, and Chris Brosnan. Their marriage ended with her death in December 1991.

His daughter Charlotte died on 28 June 2013 of ovarian cancer. Pierce and Keely Shaye have been married for 16 years now and their relationship is going very well.

Who is Pierce Brosnan?

Pierce Brosnan is an Irish actor, film producer, and activist. He is famous for playing James Bond movies from 1994 to 2005. He has played the classic spy in four films: GoldenEye, Tomorrow Never Dies, The World Is Not Enough, and Die Another Day.

Pierce was born on 16 May 1953, in Drogheda, County Louth, Ireland. His full name is Pierce Brendan Brosnan and he has Irish ethnicity. He is the only child of Thomas Brosnan, a carpenter, and Mary May Smith.

He lived in Navan, County Meath for 12 years and considers it his hometown. Pierce went to Primary School in St.Annes Primary School, Navan.

Brosnan’s father abandoned the family when Pierce was an infant. When he was four years old, his mother moved to London to work as a nurse. From that point on, he was largely brought up by his grandparents, Philip and Kathleen Smith.

After their deaths, he lived with an aunt and then an uncle, but was subsequently sent to live in a boarding house run by a woman named Eileen.

He was educated at Elliott School, now known as Ark Putney Academy, a coeducational secondary school with academy status in southwest London. His nationality is Irish and American, and he is of Irish ethnicity.

After leaving school at 16, he decided to be a painter and began training in commercial illustration at Saint Martin’s School of Art. He later trained for three years as an actor at the Drama Centre London and graduated in 1975.

After graduating from the Drama Centre in 1975, Pierce Brosnan began working as an acting assistant stage manager at the York Theatre Royal. He made his acting debut in the film Wait Until Dark.  After that, he had roles in the 1980s films The Mirror Crack’d, Nomads, Taffin, The Fourth Protocol, and many more. He rose to fame when he began playing James Bond movies.

In 1994, Brosnan became the fifth actor to portray secret agent James Bond in the Eon Productions film series. His first role as James Bond was in the 1995 movie GoldenEye. For his role in the film, he was nominated for the Saturn Award for Best Actor and MTV Movie Award for Best Fight. He later played James Bond in the movies Tomorrow Never Dies, The World Is Not Enough, and Die Another Day.

Since leaving the role of Bond, he has starred in such films as the musical/romantic comedy movies Mamma Mia! (2008), The Ghost Writer (2010), and the action spy thriller The November Man (2014). He has earned two Golden Globe Award nominations, first for the television miniseries Nancy Astor (1982) and next for the dark comedy film The Matador (2005).

As regards Pierce’s net worth, he has about $200 million worth of wealth under her name. Whereas, his annual income is not disclosed.

Pierce became a part of controversy for the unauthorized and deceptive use of his image in an advertising campaign for a chewing mixture that sometimes contains tobacco, which was considered being racist to the people of India.

He later apologized to the Indian people. He was rumored to be playing the role of Cable in Deadpool 2, but he has denied the rumors.

Pierce Brosnan has a height of 6 feet 2 inches with a bodyweight of 80 kg. He has dark brown hair color and his eye color is blue. His shoe size is 11(US).