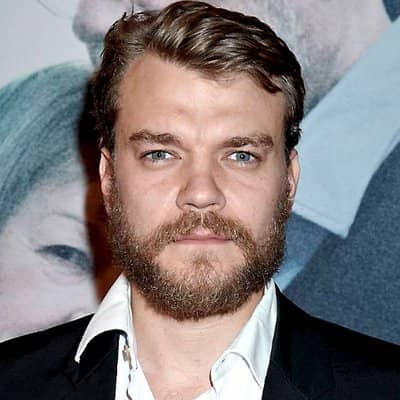 What is the relationship of Pilou Asbæk?

Pilou Asbæk tied the knot with playwright Anna Bro in 2008.

Anna is the child of the actors Hans Henrik Clemensen and Vigga Bro. They are blessed to have a daughter Agnes Bro Asbæk (born on 31 December 2012).

Pilou Asbæk is a Danish Actor known for his roles as Rune in the Danish drama film R in 2010 for which he won the Danish Film Academy Award and Danish Film Critics Association’s Bodil Awards.

Furthermore, he has played Euron Greyjoy in the television series Game of Thrones.

Pilou Asbæk was born on 2 March 1982, in Copenhagen, Denmark. His full name is Johan Philip Asbæk. As of now, he is 40 years old.

His parents Maria Patricia and Jacob A. Asbæk were both gallery owners named Galerie Asbæk in Copenhagen. His mother was from Casablanca, Morocco-born to a Danish father and a French mother.

Likewise, his father is a native of Denmark, Hammel. He grew up with two older brothers, Thomas Asbæk and Martin Asbæk. They are an art consultant at Asbæk Art Consulting and a gallery owner at Martin Asbæk Gallery respectively.

Asbæk holds Danish Nationality and his birth sign is Pisces. Furthermore, he went to boarding school at Herlufsholm School and was active in drama productions. Later, he graduated from the Danish National School of Performing Arts in the summer of 2008.

Pilou Asbæk started his career in the year 2008, he played Teis in ‘To Verdner’. The same year, he acted on Comeback, Dig og mig, Deroute, and theater: Folk og røvere i Kardemomme By, Core.

After that, he was cast in high-profile films like R, The Whistleblower, Ben-Hur, Ghost in the Cell, Run Sweetheart Run, and Outside the Wire.

In his illustrious career, he has collected a decent amount of money from his work but his net worth and salary are yet to be confirmed.

Pilou has never made any headlines for the rumors and controversies.

Asbæk is a big man with a height of 6 feet and a weight of around 80 kg. Furthermore, he has light brown hair and blue eyes.