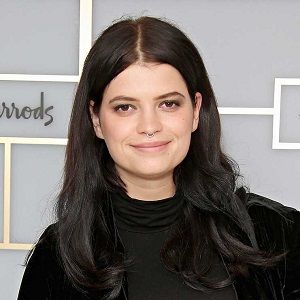 The 27-year-old famous singer, Pixie is a married woman. She tied the knot with her longtime boyfriend George Barnett on 17 June 2017. The pair has been dating since 2013 and finally got married in 2017. Previously, she has also dated American actor Evan Peters in 2010. Although, they couldn’t carry their relationship for so long and broke up in 2011.

Furthermore, there was also a rumor that she also dated English DJ Nick Grimshaw. Besides this, the English singer was also seen with Jamie Reynolds and Noel Fielding in 2007. Currently, Pixie and George are enjoying their married life and living beautifully.

Who is Pixie Geldof?

Pixie Geldof is a British pop singer and model. She is the lead vocalist of the band Violet. Furthermore, she is the daughter of Bob Geldof and Paula Yates. So far, she has also appeared in advertising campaigns for Diesel, Razzle, Levi’s, and few more brands.

Pixie was born on 17 September 1990, in London, United Kingdom. Talking about her nationality, she is British and her ethnicity is mixed. From the beginning of her childhood, she had a keen interest in music as she grew up in musician family. She was born to the father, Bob Geldof and the mother, Paula Yates and she passed away on September 17, 2000. Her father is a musician while her mom was a television presenter and writer.

Pixie began her career as a model for Tatler in 2008. Moreover, she has also been for the advertising campaigns for popular brands such as  Diesel, Razzle, Levi’s, and few more brands. She has also modeled for Vivienne Westwood, Luella, and Jeremy Scott.

Being a famous model and singer, she earns a decent amount of money from her profession. Although, her net worth and salary are unidentified.

As of now, Pixie has not won any awards in her career. However, her works have been loved and appreciated by her fans. She is still young and in the near future, she will definitely grab some awards.

So far, there are not any drastic rumors regarding her personal and professional life. Furthermore, she has never involved in any controversy to date. It seems she has total focus on her work rather than stuck in any controversy.

Pixie has a height of 5 ft 6 inches and weighs 57 kg. Furthermore, she has a pair of gorgeous brown eyes and brown hair. Moreover, her other body measurements include 32 inches bra, 24 inches waist, and 35 inches hips size.