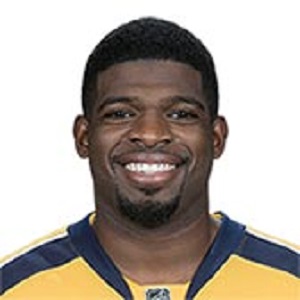 I can't wait for the crowd, the noise, the energy in the building. I can't wait to take that all away from them

Growing up, it was tough to balance, but looking back I appreciate my parents' efforts to make sure I was well-rounded.

PK Subban has kept his personal life private and out of the spotlight. He usually doesn’t talk about his private life in media and public. He hasn’t mentioned about his affairs publically and has managed to keep it low profile. There is no any record of his marriage and divorce till now. He has not clarified about his married life, affair, girlfriend and spouse till the present time. He is currently focusing on his work. According to the records, he is possibly single at the present time.

Who is PK Subban?

PK Subban is a Canadian professional ice hockey player. He currently plays as a defense for the Nashville Predators of the National Hockey League (NHL). He made his NHL debut with the Montreal Canadiens in 2009. He is the winner of the 2013 Norris Trophy as the NHL’s top defender.

PK Subban was born as Subban Randal Subban on May 13, 1989, in Toronto, Ontario, Canada. His nationality is Canadian and he is of Jamaican-Montserratian ethnicity.

His mother’s name is Maria Subban and his father’s name is Karl Subban. He grew up with four siblings named Natassia, Natasha, Jordan, and Malcolm.

There is no information about his childhood life and educational background.

Subban began his ice hockey career in the Ontario Hockey League (OHL) with the Belleville Bulls. He helped Belleville to the J. Ross Robertson Cup Finals against the Kitchener Rangers, where they lost the OHL title.

In May 2009, two weeks after his last junior game, Subban was signed to a three-year, entry-level contract by the Montreal Canadiens of NHL. He began the 2009–10 season with the Hamilton Bulldogs of AHL.

On April 26, 2010, Subban was recalled from Hamilton during the Canadiens’ first-round Stanley Cup playoff series against the Washington Capitals. He won the 2013 Norris Trophy as the NHL’s top defender. He won two World Junior Championships as a member of Canada’s junior international team. He played for the Canadiens until the 2015-16 season.

In June 2016, he was traded to the Nashville Predators in exchange for defenceman Shea Weber. Since then, he plays as a defense for the Predators.

PK. Subban: Salary and Net Worth

He has a net worth of $35 million and his salary is $9 million/year.

Pk has a height of 6 feet. His body weighs 98kg. Besides these, he has black hair. Also, his eyes are black.