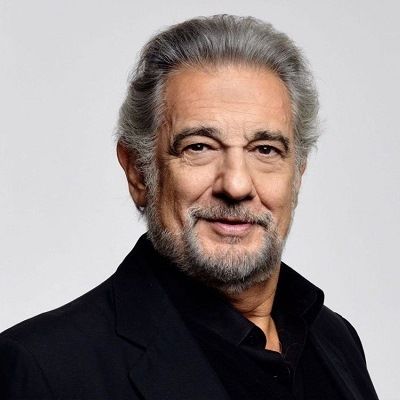 I feel like a little boy who is constantly offered new toys.

To stay at my best, I have to stop talking during the preceding day.

Should it happen tomorrow, I would fall to my knees to give thanks to God for such a career.

Every three days on average, I am alone on stage, facing the public.

On the other hand, I have devoted so much energy to reach the top that I accept the stress of being there.

Placido Domingo married piano classmate Ana María Guerra Cué on 29th August 1957. The couple had a son José Plácido Domingo Guerra on 16 June 1958 and he grew up to become a photographer.

However, their marriage did not last long and they separated shortly after the birth of their child.

Who is Placido Domingo?

Placido is a Spanish opera singer, conductor, and arts administrator.

Likely, he is well known for his versatility, regularly performing in Italian, French, German, Spanish, English, and Russian in the most prestigious opera houses in the world.

He had the ability to hum complicated zarzuela tunes even at the age of five.

He had a sister namely, Maria José Domingo de Fernandez. As a child, he along with his sister used to occasionally perform in their parent’s zarzuela acts.

Placido holds Mexican- Spanish citizenship, but his ethnicity is unknown. His birth sign is  Aquarius.

Talking about Placido’s education history, he attended the National Conservatory of Music.

During 2010, he had to undergo surgery as he was diagnosed with colon cancer and he made a complete recovery. In the year 2013, he was hospitalized after suffering from a pulmonary embolism.

However, he was discharged in a few weeks.

Talking about his profession, during 1957, Placido Domingo made his debut professional piano performance at a concert in Mérida, Yucatán. In the same year, he gave his first zarzuela performance by singing a solo baritone role. Additionally, he began by assisting in his parents’ zarzuela company by taking up baritone roles and assisting other tenors.

In the year 1959, he appeared in a baritone role in Emilio Arriera’s opera ‘Marina’. Around this time he also worked as an assistant coach and assistant conductor in the Latin American production of the musical ‘My Fair Lady’. While he was a team member of the production, the musical is said to have been played around 185 times across various parts of Mexico.

During 1959 Plácido Domingo auditioned for the baritone role at the Mexico National Opera. However, he was inducted as a tenor and a tutor for other singers. In September that year, he performed in the Opera named ‘Rigoletto’. Well-known operatic baritones Cornell MacNeil and Norman Treigle performed along with him.

He gave his debut performance with this group on 17 June 1965 in Puccini’s ‘Madama Butterfly’. Similarly, in 1966, he performed the title role of ‘Don Rodrigo’ and this earned him much appreciation and critical acclaim.

In 1973, Plácido Domingo conducted his initial opera presentation. In fact, he has also appeared in the filmed versions of the opera. Whereas, Plácido Domingo recorded a song ‘Perhaps Love’ with American singer John Denver in 1981.

Following the success of this debut, he recorded many more albums. In 1982 he performed in his opera movie titled ‘La Traviata’. In the year 1984, he performed for the movie version of opera ‘Carmen’.

Similarly, in 1991, he debuted through the portrayal of the character in Parsifal, and in 1992 he performed as Siegmund. For almost two decades that followed, he continued to portray these characters. In the year 1994, he performed his debut Mozart opera, ‘Idomeneo’. With the onset of the 21st century, he concentrated on fresh roles. He shifted music styles and appeared in 18th-century operas towards the end of the decade.

In the year 2002, he made a guest appearance in the song ‘Novus’ from the musical album Shaman by Santana.  Therefore, he continues recording, and in 2014 he released ‘Encanto del Mar: Mediterranean Songs’ and ‘Puccini: Manon Lescaut’.

Similarly, he won Honorary Award, he also won Live Performance at Star on the Walk of Fame.

Placido Domingo has a height of 6 feet 3 inches and he weighs 84 Kg. His hair color is grey and his eyes color is dark brown.

Also get to know more about Dave Grohl, Howard Hesseman, and Betty White.