Pollyanna McIntosh was previously married to actor Grant Show. The pair married on 17 July 2004. They later divorced in 2011. The pair does not have children from this relationship. Currently, McIntosh is believed to be single. 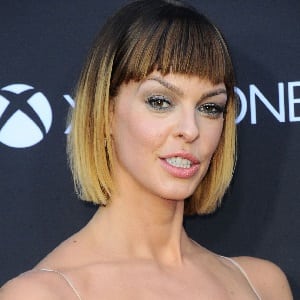 Who is Pollyanna McIntosh?

Pollyanna McIntosh is a Scottish American actress. People mostly know her for her role in the films ‘The Woman’ and ‘Hap and Leonard.’ Additionally, she also appeared in the seventh, eighth and ninth seasons of the popular TV series ‘The Walking Dead.’

McIntosh was born in Scotland on March 15, 1979. She was born to parents David McIntosh and Judith McIntosh. McIntosh became interested in the world of acting from an early age. She is of British nationality.

Furthermore, she belongs to the mixed ethnic background of English and Scottish.

Talking about her education, McIntosh attended St George’s School for Girls. Additionally, she graduated in drama and theatre studies.

McIntosh initially debuted as an actress aged 16. She worked in several London’s independent film and theatre works. In 2005, she appeared as Stacy in the movie ‘Headspace.’ In 2007, she had roles in ‘Sex and Death 101’, ‘Bats: Human Harvest’, and ‘9 Lives of Mara.’ Since then, she has appeared in several other movies and television series. All in all, she has over 35 credits as an actress.

Some other movies and television series that McIntosh has appeared in include ‘Blood Ride’, ‘The Last Tycoon’, ‘Hap and Leonard’, ‘Native’, ‘Tales of Halloween’, ‘The Blood Lands’, ‘Let Us Prey’, ‘M.I.High’, ‘Como Quien No Quiere La Cosa’, ‘Carlos Spills the Beans’, ‘Prevertere’, ‘Filth’, ‘Casualty’, ‘Love Eternal’, ‘Noise Matters’, ‘Bob Servant Independent’, ‘Blue Dream’, ‘Waterloo Road’, ‘The Famous Joe Project’, ‘I Do’, ‘Book Club’, ‘Dani’s House’, ‘The Woman’, ‘Burke and Hare’, ‘Offspring’, ‘Land of the Lost’, and ‘All Ages Night’ among others. Furthermore, Pollyanna also has 2 credits as a director and 2 credits as a writer.

McIntosh won the Fright Meter Award in 2011 for her performance in ‘The Woman.’ In addition, she also won the Festival Prize in London Independent Film Festival. In 2017, she garnered the Nightmares Film Festival Award nomination. All in all, she has 4 wins and 2 nominations to her name for various awards to date.

McIntosh has not revealed her current salary. However, she has an estimated net worth of around $1 million at present.

McIntosh has not been linked with any controversies in her career. Furthermore, at present, there are no rumors concerning her life and career.