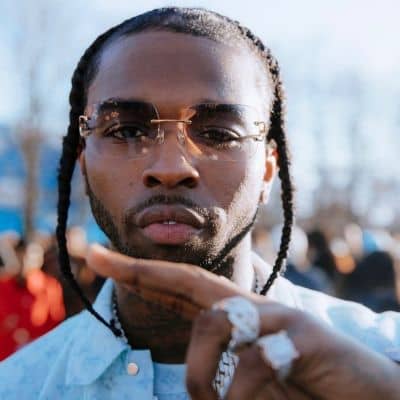 Talking about his love life, Pop Smoke was dating Alyssa Danielle known as Yummy Yellow at the time of his death. Yummy Yello is a model and a web star by profession. She shared her great sorrow post the death of Pop.

Previously, he was dating Jazzyy Mulani. She is an Instagram star and entrepreneur by profession. However, the rapper had not shared any details regarding his relationship.

Who was Pop Smoke?

Pop Smoke was a well-recognized American rapper, singer, and songwriter. Smoke was widely famed for his singles, Welcome to the Party and Dior in 2019.

Moreover, he released his debut Mixtape Meet the Woo in July 2019, and his second mixtape, Meet the Woo 2 was released on 7 February 2020.

Pop was the son of his father, Greg Jackson whereas his mother was Audrey Jackson. Moreover, he had an older brother, Obasi.

Talking about his nationality, Smoke held an American identity whereas his ethnicity was Jamaican-Panamanian.

Regarding education, the rapper attended nine different schools while growing up in Brooklyn. He was expelled from eighth grade for bringing a gun to school. Later, Pop joined Rocktop Academy for playing basketball.

Officially Smoke had been known as an American rapper, singer, and songwriter. A lot of fans considered him as the face of the Brooklyn drill. He started his musical journey in the year 2018. It began when Pop went to the recording studio with his mate rapper, Jay Gwuapo. The young rapper went into the booth after being high from drugs and tried rapping for the first time.

The rapper quickly connected himself in the rap scene with viral hits named, Meet the Woo and Welcome to the Party. Later, the late rapper released a mixtape called Meet the Woo Volume 1 in the summer of 2019. He then became part of Pusha T on the stage at the time of the Best Day Ever Festival in Coney Island.

In the beginning, Smoke used a beat he received from 808Melo’s YouTube channel. Afterward, the late rapper recorded his debut single named, Mpr(Panic Part 3 Remix). Since then, he had collaborated with UK drill artists and producers.

However, he came into the limelight after releasing his single, Welcome to the Party in 2o19. Following his success, Pop was identified by Rico Beats to Steven Victor in April 2019. He signed a recording contract with Steven, Victor Worldwide, and Republic Records. The rapper soon released his first mixtape, Meet the Woo in July 2019. Following his debut, the rapper then released his next mixtape named, Meet the Woo 2 on 7 February 2020.

An American rapper, Smoke had earned a handsome amount of money from his profession. He was active in his profession from 2018 till 2020.

It is reported that Pop Smoke had an estimated net worth of $2 million.

However, the great rapper had not disclosed his exact salary, earnings, and assets details till now.

Pop Smoke rented a house owned by The Real Housewives star Teddi Mellencamp and her fiance, Edwin Arroyave, in Hollywood Hills, California. On 19 February 2020, a group of four hooded men wearing a ski mask and carrying a handgun broke into the house at around 4:30 a.m.

The LAPD got the news of the home invasion from a call from the East Coast. However, they arrived six minutes after Pop was shot and they found him with several gunshot wounds. The late rapper was rushed to Cedars-Sinai Medical Center and was announced dead after few hours.

On 9 July 2020, three adult men and two minors were arrested by the police for the murder of the rapper. His killers were recognized as Corey Walker, Keandre D Rogers, Jaquan Murphy, and two unnamed young lads.

The officers first suspected that his death was gang-related since he was linked to the Crips. However, it went wrong. His body was buried at Green-Wood Cemetary. Pop’s family, friends, and fans were presented to show their respect.

The great rapper was arrested after returning from Paris Fashion Week on 17 January 2020 by federal authorities at John F. Kennedy International Airport in charge of stealing a Rolls-Royce Wraith whose value was $375,000. He had posted a photo of himself in front of the stolen car on Instagram and Facebook.

The car was however recovered by authorities at Pop Smoke’s mother’s home. Earlier, the police officer tried to catch Smoke to snitch on the Crips after his arrest. They inquired him about a non-deadly shooting that took place in Brooklyn in June 2019.

In addition to that, Police also tried to force Pop into telling them more details about the Crips, GS9, and other street gangs. However, the late rapper denied it.

20 years old rapper, Pop Smoke had cool looks and a great personality. He stood at a height of 5 feet 5 inches. Also, he had a balanced body weight of 59 kg.

Furthermore, Smoke had black eyes whereas his hair was black. His body measurement were 35-30-14 inches(chest-waist-biceps) respectively.

Regarding his social media presence, Pop Smoke was an active personality on social media. Pop had more than 3.7 million followers on his official Instagram account @realpopsmoke.

He was also active on Twitter with around 243.2k followers.

However, Smoke was not available on Facebook at the moment.