Renowned as the reporter of CNN. 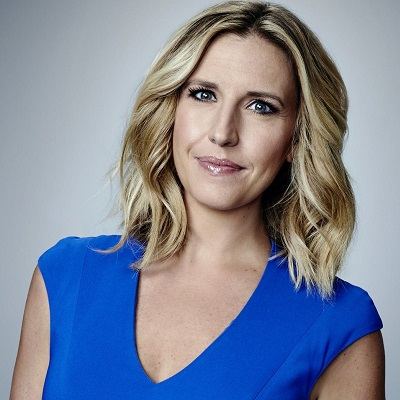 The writers on my team and the producers and executive producer should be called talent. We anchor four hours on Saturday and three on Sunday. How they do that astonishes me.

Even after working at 'MarketWatch' and loving journalism and loving business news, I still wanted to be a lawyer because it was my plan

I've made my mistakes at CNN. As I learn and I grow, one thing that has always stuck with me is you can never be over-prepared, and nobody can fight the facts.

What is the relationship of Poppy Harlow?

Poppy Harlow is married to Sinisa Babcic. Her husband is a journalist and business analyst by profession. They exchanged vows on the 1st September 2012 in New York.

Who is Poppy Harlow?

Poppy Harlow is a multiple Emmy Award-winning journalist. She is renowned as a reporter for CNN.

Poppy Harlow was born on the 2nd of May 1982 in Minneapolis, Minnesota to James Lee Harlow and Mary Louis Baird. Her birth name is Katharine Julia Harlow. She is of English ethnicity.

Her late father, James was an attorney by profession. He passed away when she was just 15 years old. Harlow has a younger brother. On the 16th of May 2012, her brother graduated from Columbia University.

In 2001, she completed her High School education at The Blake School. Later, she earned a bachelor’s degree from Columbia University with Honors Political Science and majored in Middle Eastern Studies.

During their university days, she used to be a member of the society, Phi Beta Kappa.

Poppy Harlow started her career as an intern for the CBS network during her college days. Later, she became the assistant producer of CBS’s financial website, MarketWatch.

She left the job to be a reporter and anchor for NY1 New’s Local Edition. For the network, she used to cover Staten Island and New Jersey in topics related to local politics and cultural events.

In September 2007, she joined Forbes.com. For the network, she covered the topics concert to Fashion, Entertainment, and Business. The following year, she joined the CNN network and worked as an anchor for CNNMoney.com. Since that, she co-hosts CNN’s program, CNN Newsroom.

In April 2012, she became the NY-based correspondent of the network. Apart from CNN Newsroom, she has also co-hosted the show, Erin Burnett OutFront with Erin Burnett and New Day.

As of now, she has interviewed the world’s top-class business personalities like Warren Buffett, JPMorgan Chase, Mark Zuckerberg, Sundar Pichai, Wes Moore, and many more.

Poppy Harlow has blue eyes with blonde hair. She stands at a height of 5 feet 5 inches and has a decent weight that is 55kg. Her body measurements are 34-25-36 inches.

Back in 2013, she faced huge criticism when she was reporting on the Steubenville High School rape case for CNN. In the report, she sounded sympathetic towards rapists; Trent Mays and Ma’lik Richmond.

After the report, a petition was filed requesting apologize from the network. The petition was signed by over 250 thousand people within two days.

On the 28th of December 2015, she has been in the headlines when she passed out in mid of the broadcast. Ten minutes after that, she was back in the air and told she had gotten a little hot and passed out for the moment. Later, she made an announcement through Twitter that both she and her unborn daughter were fine.

You may also read the bio of Adam Fleming, Anne Thompson, and Dan Peres.

Why is Poppy Harlow not on CNN anymore?

What is Poppy Harlow's real name?

Get to Know the Career and Relationship of One of the Most Popular and Sizzling Hot TV Meteorologist, Indra Petersons