Porsha Williams is an American television personality and actress. She was seen in The Real Housewives of Atlanta in the fifth season in 2012. She is in a relationship and has a child.

Porsha Williams is dating Dennis McKinley and in September 2018, she revealed that she is pregnant with his child and on 22nd March 2019, her daughter, Pilar Jhena was born.

Previously, she was married to Kordell Stewart. They couldn’t continue their relationship and divorced in 2013.

She has also been in a relationship with LeSean McCoy during the year from 2014 to 2016, and with Teodoro Nguema Obiang Mangue in 2014. 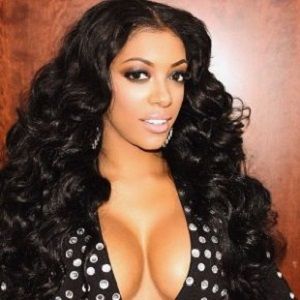 I can't talk to her on the phone right now, i don't know what else to say. Of course,I have a soft spot for Phaedra. It's where you don't want to be manipulated anymore

I don't know what else to say. Of course,I have a soft spot for Phaedra. It's where you don't want to be manipulated anymore

I may get to a point to where I'm strong enough where I can talk to her and we can maybe work through it, but right now it's still so new for me.

Who is Porsha Williams?

Her mother’s name is Diane T. Williams and her father’s name is Hosea Williams, II. Her parents are self-employed entrepreneurs. She has a younger sister Lauren. As a young girl, she was highly interested in the modeling and acting field.

Concerning her educational background, she attended American InterContinental University in Schaumburg, Illinois, and earned a degree in business information technology.

Firstly, Porsha Williams appeared in music videos at the initial phase of her career. In 2005, she worked as a model for a “pin-up” calendar for the Atlanta Dymes.

She also worked as a cast member for the fifth season of the reality television series “The Real Housewives of Atlanta”. Her debut single “Flatline” was released on March 17, 2014. In September 2015, Bravo T.V announced that Williams had signed to be a full-time housewife once again, along with newcomer actress Kim Fields.

On January 28, 2016, it was announced that she is participating as a contestant on “The New Celebrity Apprentice”. Some of her other appearances include “Platinum Weddings” (2011), “The Real Housewives of Atlanta” (2013-present), “Dish Nation” (2014-present), “Star” (2017). Nothing is published relating any awards she has won in her lifetime career; however, she is working hard to make stand herself in the front line.

It is said that she gets paid a handsome amount of money and has an estimated net worth of $500,000 but her salary is not revealed yet.

There was also a rumor that she is a lesbian. News was also there about her pregnancy. But recently, she denies all those rumors of having a child.

Porsha Williams has a height of 5 feet 7 inches. She has black hair and black eyes. Furthermore, her body figure measures 36-25-39 inches. Her body weighs 64kg.