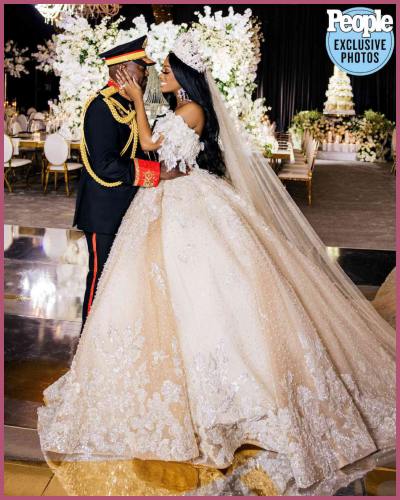 The couple, who already tied the knot in an Nigerian traditional ceremony, exchanged vows again for the second time in an American ceremony.

The American wedding celebration took place a day after they married in a Nigerian traditional native law and custom ceremony on Saturday, November 25.

Porsha Williams and Simon Guobadia’s American wedding was planned by Eliana Baucicault of Elly B events at a Methodist church in Georgia with an attendance of 350 guests.

The Real Housewives of Atlanta alum, 41, gushed to People ahead of the ceremony,

“I definitely want the Lord to be in the place. I want the Holy Spirit to usher us into being a husband and wife,”

While she walks down the aisle singer Tasha Cobbs Leonard sang “For Every Mountain” with a gospel choir and 40-piece orchestra. Her sister, Lauren, served as her maid of honor, her best friend, Shamea Morton, served as her matron of honor, and her bridesmaids.

Similarly, Williams’s 3-years old daughter Pilar Jhena, whom she shared with ex-partner Dennis McKinley, and Guobadia’s children from previous marriages also had a special role in the ceremony.

Here are the other three wardrobes from her wedding

After the ceremony, she changed her gown for the reception designed by Albina Dyla. Their reception was held at St. Regis Atlanta.

Similarly, Williams changed two more dresses; one for the bouquet toss, and then again for the after-party. While PEOPLE gushed about her wedding dress, she said,

“I thought, ‘Why not? It’s my last wedding forever.”

Well, Williams previously revealed that they were having multiple celebrations for their big day. Here we go!

Who is Porsha Williams?

Porsha Williams is an American model, actress, singer, and TV personality. She is extremely prominent for “Dish Nation” (2011), “The Real Housewives of Atlanta” (2008), and “The Apprentice” (2004). See more…