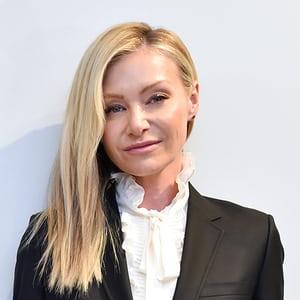 In high school I had sex with girls quite a few times. They were straight women who I convinced to jump in the sack with me.

I'm living by example by continuing on with my career and having a full, rich life, and I am incidentally gay.

I love being able to wear dresses and clothes that make me feel feminine and beautiful, and I love the fact that I don't have to all the time

I can wear a tank and jeans.

My feelings for Ellen overrode all of my fear about being out as a lesbian. I had to be with her, and I just figured I'd deal with the other stuff later.

Everyone is their own kind of lesbian. To think there's a certain way to dress or present yourself in the world is just one more stereotype we have to fit into.

What is the relationship of Portia de Rossi?

Portia de Rossi was married to documentary filmmaker Mel Metcalfe, from 1996 to 1999.  In 1999, after splitting from Me Metcalfe, she started dating another American actress, Guinevere Turner.

They dated briefly and got separated in the same year. From 2001 to 2004, de Rossi dated director Francesca Gregorini, the daughter of Barbara Bach and the stepdaughter of Ringo Starr. The pair broke up in late 2004 because de Rossi began dating Ellen DeGeneres, whom she met backstage at an awards show.

Rossi opened up publicly about her sexual orientation in interviews with Details and The Advocate in 2005. She is currently a married woman.

She and DeGeneres became engaged when DeGeneres proposed with a three-carat diamond ring. Later, they were married at their Beverly Hills home on 16 August 2008. She filed a petition to legally change her name to Portia Lee James DeGeneres on 6 August 2010.

Who is Portia de Rossi?

Portia de Rossi is an Australian and American actress, model, and philanthropist.

She appeared as a regular cast member on the American political thriller television series ‘Scandal’ in the role of Elizabeth North from 2014 to 2017. She is married to comedian and television host Ellen DeGeneres.

Rossi was born in Horsham, Australia on January 31, 1973, to parents Margaret, a medical receptionist, and Barry Rogers. She is 48 years old. Her father died when she was nine years old.

Throughout most of his childhood years, she grew up in Grovedale, a suburb of Geelong, Victoria, and modeled for print and TV commercials since her early life. She is of American-Australian nationality. Furthermore, she belongs to an English ethnic background.

Talking about her education, Rossi attended Melbourne Girls Grammar School. Later, she graduated from the University of Melbourne, where she studied law.

Rossi was initially a young and impressionable model in the Australian 1994 film ‘Sirens’. Later, she moved to Los Angeles and won guest roles on several TV shows, and a permanent role in ‘Nick Freno: Licensed Teacher, before landing a part in the film ‘Scream 2’.

Next, she received widespread fame after she joined the main cast of ‘Ally McBeal’ in 1998. Since then, she has appeared in numerous other movies and television series, and all in all, she has over 35 credits as an actress.

Some other movies and television series that Rossi has appeared in are ‘Santa Clarita Diet, ‘Now Add Honey’, ‘Sean Saves the World’, ‘Arrested Development’, ‘The Smart One’, ‘Better Off Ted’, ‘Nip/Tuck’, ‘Cursed’, ‘Dead & Breakfast’, ‘Two Girls from Lemoore’, ‘The Night We Called It a Day, ‘I Witness’, ‘Mister Sterling’, ‘The Twilight Zone, ‘Ally McBeal’, ‘Women in Film’ and ‘American Intellectuals’ among others. Additionally, Rossi supports a variety of charitable organizations, including Locks of Love. Furthermore, she has also supported fundraising efforts for FXB International.

Rossi has not revealed her current salary. However, he has an estimated net worth of around $50 million at present.

There was a rumor in 2013 that suggested that Rossi might be pregnant. This later turned out to be false and Rossi stated that she and DeGeneres were not planning to have children. She became part of a controversy after she made a claim that actor Steven Seagal sexually harassed her during an audition.