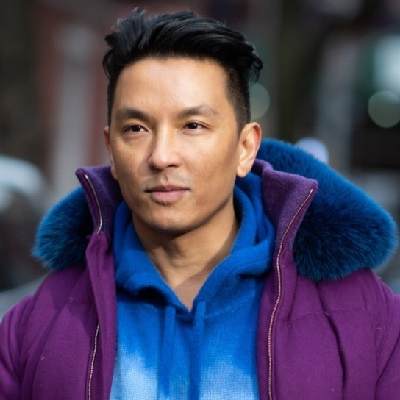 Prabal Gurung is currently in a relationship. However, details on his relationship is totally a mystery. He has not disclosed any details about his partner or lover.

Who is Prabal Gurung?

Prabal Gurung was born on 31st March 1979 in Singapore. He is Far-East Asian ethnicity with Nepali ancestry.

He happens to be the youngest child to her parents; Durga Rana. His mother, Durga used to own a boutique whereas his father was an army.

He has two elder siblings including a brother, Pravesh Rana Gurung, and a sister, Kumudini Shrestha. Pravesh is an Indian movie director. Her elder sister, Kumudini leads her life away from the glamour as a teacher and social worker. He shared a picture of his family via Instagram post.

Moving to his academics, he completed his High School at the reputed school, St. Xavier’s School. Later, he earned a bachelor’s degree from the National Council For Hotel Management And Catering Technology in India.

However, his keen interest in the fashion world led him to the National Institute of Fashion Technology.

After attending the Fashion Institute, he started working with the various fabrics, embroideries, and textile in Chandni Chowk under the fashion designer, Manish Arora as his mentor.

Later, in 1999, he got an opportunity to attend the Parson School of Design where he worked under the designer, Donna Karan. After that, he worked for various designers including Cynthia Rowley and Bill Blass.

In February 2009, he launched his first Fashion Week along with FLAG Art Collection. Following that, he has designed for numerous celebrities from Hollywood like Oprah Winfrey, Michelle Obama, and Lady Gaga, and Bollywood including Priyanka Chopra and Deepika Padukone.

Besides that, his designs have been flaunted by the personalities like first lady Michelle Obama and Duchess of Cambridge, Kate Middleton.

Besides being a fashion designer, he is also the founder of the Shikshya Foundation. The foundation has launched various programs that have to benefit underprivileged children in the education sector.

Also, he created the relief fund for the victims after Nepal was hit by the earthquake in 2015.

He has black eyes with black hair. He stands at a height of 5 feet and 9 inches and went around 68 kg.

A focus on quality and innovation is all you need to sustain in Fashion World. Explore about Prabal Gurung a Nepalese-American fashion designer!

What a way to start a career! Cecilia Cassini began designing clothes from age 10, ‘The youngest fashion designer!’