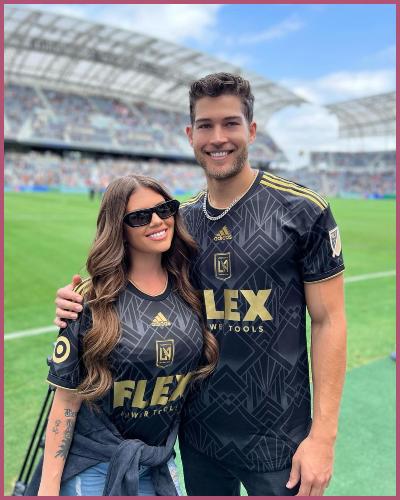 Chanel West Coast, 33 has a baby on the way with her boyfriend Dom Fenison.

The Ridiculousness star exclusively shared details of her Pregnancy to E! News on Thursday, June 2, just months after their relationship official. She disclosed,

“I don’t know if it’s a boy or girl yet. I’m just praying for a happy, healthy baby. I’m just really excited for this next journey in my life. It’s probably my scariest journey yet, but sometimes the scary roads lead to the best endings.”

In addition, Coast shares that she has been dealing with nausea that comes with pregnancy. She is presently in her first trimester.

The musical artist also praised her model boyfriend for being the “most level-headed person” in her life at this time. She expressed,

“Dom is definitely the most level-headed person I’ve ever had in my life. Raising children is not an easy thing so you really have to be like that to be a good dad. He’s just so calm and relaxed and I can be a little bit crazier. I think that he’s the perfect balance for me,”

Well, Chanel might be debuted her baby bump at the 2022 MTV Movies & TV Awards. The event will be held on June 4, 2022, at the Barker Hanger in Sant Monica, California.

The couple first went public with their relationship earlier this year. In February, Chanel confirmed her relationship with the model, Dom Fenison. While interviewing with In Touch Weekly, Dom revealed,

“We’ve known each other for, like, five or so years, but we kind of just rekindled our relationship ’cause I was in her new music video for ‘Vinyl’,”

In March, the two debuted their romance on Instagram sharing images of the two both hugging and kissing.

Also read “Pregnant again! Patrick Mahomes and Brittany Matthews have a Baby no.2 on the way”

Chanel West Coast is a famous American entertainer who has gained prominence as a rapper, singer, songwriter, actress, model, and television personality. She gained popularity for her roles in MTV’s Rob Dyrdek’s Fantasy Factory and Ridiculousness. See more…