Posted on November 22, 2022 | Published By: Gracie Hale | In Relationship , Wedding
Share this 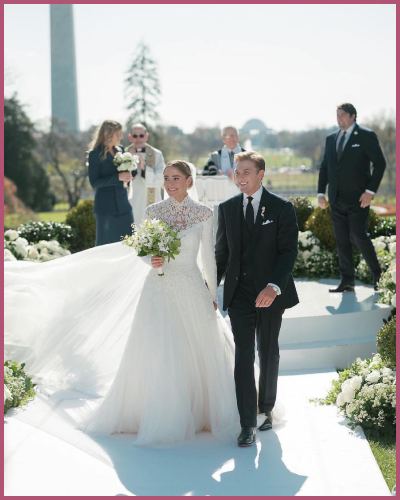 The 19th wedding in the history of the White House

Naomi Biden walked down the aisle to her fiance, Peter Neal, on Saturday, November 20. This is the first wedding that has ever taken place in the South Hall of the White House attended by Naomi’s grandparents, President Joe Biden and first lady Jill Biden.

It’s also the first White House wedding with a bride who is the president’s granddaughter. According to a source close to the family, Naomi Biden’s mother, Kathleen Buhle, and father, Hunter Biden, both escorted her down the aisle.

The President and the first lady said in a White House statement,

“It has been a joy to watch Naomi grow, discover who she is, and carve out such an incredible life for herself,”

“Now, we are filled with pride to see her choose Peter as her husband and we’re honoured to welcome him to our family. We wish them days full of laughter and a love that grows deeper with every passing year.”

The wedding was a private ceremony attended by about 250 guests, including family and friends. Similarly, the venue was decorated with white roses garlands, and other blooms were hung from the Truman Balcony and woven along the staircases down to the South Lawn.

While walking down the aisle, the bride, 29, looked stunning in a white custom Ralph Lauren gown. The Chantilly lace wedding gown has long sleeves, a high neck, a veil, and a long train.

Similarly, the groom wore a three-piece navy blue suit with a matching tie and a brooch pinned to his lapel.

Peter Neal came into the limelight of the media after his engagement with Naomi was confirmed in September 2021. The couple has kept their romance private up until the announcement of their engagement.

According to reports, the two met through a mutual friend in New York City back in 2018 and have been together ever since. Neal proposed to Naomi near his childhood home in Jackson Hole with a ring that repurposed the band of his grandmother’s engagement ring.

Neal, 25, hails from Jackson Hole. He recently graduated from law school at the University of Pennsylvania on May 16, 2022. He is employed at the Georgetown University Law Center in Washington, D.C.

Further, he also interned for Hilary Clinton‘s presidential campaign and at the White House during Barack Obama’s presidency. In fact, Peter currently lives in the White House together with Naomi, on the third floor of the residence.