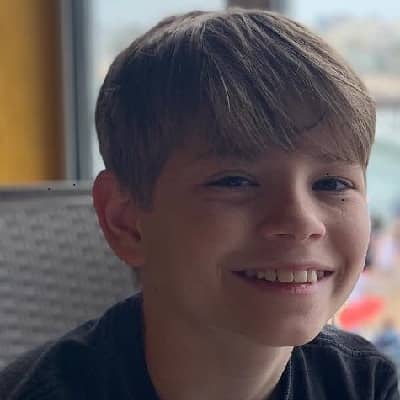 Preston Oliver’s current relationship is possibly Single. He is too young to be in a romantic relationship.

Currently, he is focusing on his education and career. In the further days, if he introduces anyone as his girlfriend then we will update it.

Who is Preston Oliver?

Preston Oliver is a Television actor who rose to fame for starring as Griffin in the Disney Channel series “Secrets of Sulphur Springs“.

The television actor was born in Las vega, Nevada, United States. The birth date of Preston is on February 2, 2006. He holds an American nationality and his ethnicity is Caucasian.

The identity of Preston isn’t available including his father, mother, and siblings. From an early age, he is interested in acting while he was in 5th grade he secretly auditioned for his Elementary School play “Peter Pan” and was cast in a supporting role as a Pirate.

Moving towards his academic details, he hasn’t revealed his school name but he might be studying in high school.

In addition, he joined acting classes where he connected with Coast to Coast Talent Group.

At the age of 12, Preston made his acting debut portraying the role of Riley Noyd on NBC’S Chicago Fire in 2019 alongside Taylor Kinney and Jordan Belfi.

In the same year after 3 months, he cast in This is Us portraying the role of Andre as the son of Justin Hartley. Preston came out into the limelight in the media after cast for the lead role of Griffin on Disney’s secrets of Sulphur Springs TV series in 2020.

Moreover, he also appeared on an episode of Rosewell, New Mexico.

Preston hasn’t involved in any sorts of rumors and scandals that hamper his uprising career.

The actor is fresh in the entertainment field. So, his net worth isn’t available and also his salary too.

The actor is 5 feet and 2 inches tall unfortunately his weight is unknown. Likewise, he has a dark brown eyes color and hair as well.

However, he is not active on Facebook and all the social media sites are handled by his parents.