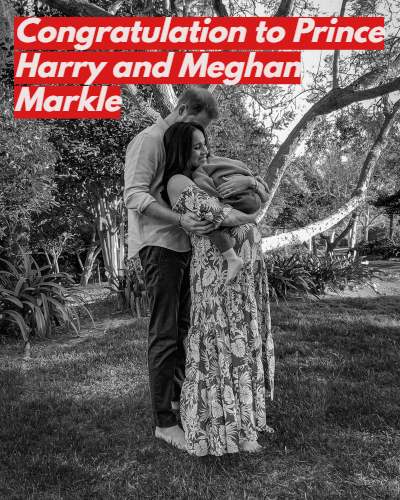 The Duke and Duchess of Sussex Prince Harry and wife Meghan Markle are now parents of two! Their son Archie now has a sibling, Lilibet ‘Lili’ Diana Mountbatten-Winsdor born on 4th June 2021 in a hospital in Santa Barbara, California. They revealed that both mother and child are healthy and are doing well. Similarly, the couple released a statement,

“It is with great joy that Prince Harry and Meghan, The Duke and Duchess of Sussex, welcome their daughter, Lilibet “Lili” Diana Mountbatten-Windsor, to the world. Lili was born on Friday, June 4 at 11:40 a.m. in the trusted care of the doctors and staff at Santa Barbara Cottage Hospital in Santa Barbara, CA. She weighed 7 lbs 11 oz.”

The baby girl is named after her great-grandmother, Her Majesty The Queen, whose family nickname is Lilibet. Similarly, her middle name Diana was chosen to honor her beloved late grandmother, The Princess of Wales who passed away in 1997. Not just that, the couple also announced the birth of the baby girl on the Archewell website. They revealed how blessed they are with her birth.

More on the birth

They thanked everyone for the love and support they have received. Not just Meghan and Prince but everyone in the royal family is delighted to hear the news of the baby. Furthermore, a Spokesperson from Buckingham palace said,

Prince Harry and Meghan Markle are yet to release the pictures of their newborn daughter.

Prince of Wales, familiarly known as Prince Harry, is the younger son of Charles, and Diana. Likewise, at the time of his birth, he was third in the line of succession to succeed his grandmother, Queen Elizabeth II. But is currently fifth in line after his father, his elder brother Prince William, and William’s children, George and Charlotte. Read more bio…

Tags : Prince Henry of Wales Son of Charles and Diana