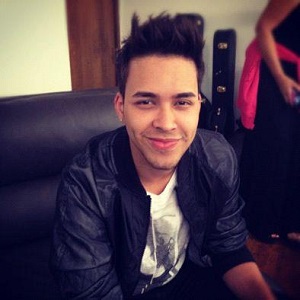 I just think Valentine's Day is a day to really appreciate the person you love, no matter who it is, and to spend time with them. I don't think it's all about fancy presents or whatever. I think it's about spending that quality time with that special person

I grew up having two different perspectives - one in English, one in Spanish. Two different cultures, very different - but I think that, to me, it's one. I'm just as American as I feel Latin

I grew up playing basketball and eating hot dogs on the corner.

Royce has been romantically linked to actress Emeraude Toubia since 2011. It was later only in April of the year 2016 that the couple publicly confirmed their relationship. Soo in June 2017, they engaged as well. Toubia was featured in the music video of the single “Culpa al Corazón” from Royce’s fifth studio album in November 2015.

The couple civilly married on November 30, 2018. Other than this, nothing much of information is known to the mainstream media regarding the relationship matter of the talented singer Prince Royce.

Who is Prince Royce?

Prince Royce is an American singer and songwriter. In March 2010, he released his eponymous debut studio album, which generated 2 commercially successful singles, “Stand by Me” and “Corazón Sin Cara”.

He received 3 awards at the Billboard Latin Music Awards in 2011, which included Tropical Album of the Year. On April 10, 2012, Royce released his second studio album, Phase II. The album was nominated for the Latin Grammy Award for Best Tropical Fusion Album.

His third studio album, Soy el Mismo, was released on October 8, 2013. It earned him his second nomination for the Latin Grammy Award for Best Contemporary Tropical Album.

Royce was born on May 11, 1989, in The Bronx, a borough of New York City. His birth name is Geoffrey Royce Rojas.

His mother’s name is Angela Rojas and father’s name is Ramon Royce. He has three siblings and he was born to Dominican parents. When he was young, he participated in a choir in the elementary school, competed in various talent shows and, at 13, began writing poetry which turned into songwriting.

Other than this, nothing much information is known about his early life, childhood, and education.

At 15, Royce began making music with a partner named Jose Chusan better known as “Jino”. The duo was also known as Jino and Royce, El Duo Real. At 16, he started making music with his longtime friend & producer Donzell Rodriguez, and Vincent Outerbridge known as “L Snipe & Vinny”. The duo eventually had a meeting with Atlantic Records in early 2007.

With the declination of reggaeton music, Royce made the ultimate decision to focus more on the bachata industry. At 19, Royce met Andrés Hidalgo, who after hearing his previous demo instantly became his manager.

Hidalgo began helping Royce work hands-on with bachata music. That became the turning point for Royce, helping him to decide that pursuing a musical career is what he wanted to do. Hidalgo later introduced Royce to Sergio George, who immediately signed Royce to his label, Top Stop Music, after listening to 3 of his demos.

Royce released his eponymous debut studio album on March 2, 2010. Shortly after the release, the album debuted on the Billboard Latin Albums chart at 15. The lead single from the album, “Stand by Me” (a cover of Ben E. King’s 1961 song) peaked at number 1 on the US Billboard Tropical Songs chart. The album eventually reached number 1 on the US Billboard Latin Albums chart & was certified double platinum by the Recording Industry Association of America (RIAA). It earned him a nomination for Best Contemporary Tropical Album at the Latin Grammy Awards of 2011.

Royce then went on to collaborate with Daddy Yankee on the song “Ven Conmigo”, which was included on the latter’s album, Prestige. In May 2011, Royce signed with Atlantic Records to release English-language albums in a joint partnership with the Top Stop label. He then began working on his 2nd studio album, which was said to be mostly in English with Latin music influences.

On April 10, 2012, Prince Royce released his 2nd studio album, Phase II. The 13-track album incorporated a variety of music styles, from bachata to mariachi, & contained songs in both English and Spanish. In the week of Phase II’s release, Royce attended 4 autograph signing events in US. His appearance at an f.y.e location in Chicago broke an attendance record for most visitors to an in-store music event. Later in 2012, he was featured as one of People en Español’s “Sexiest Men Alive”. Royce’s second album was later nominated for Best Tropical Fusion Album at the Latin Grammy Awards of 2012. This made him a 3-time Latin Grammy-nominated artist.

In November 2012, Royce’s label decided to release a collection of his hits thus far; titled #1’s. The compilation album was released on November 19, 2012 & debuted at number 3 on the Billboard Latin Albums chart. The album was later nominated for Tropical Album of the Year at the 2014 Latin Billboard Music Awards.

In April 2013, it was announced that Royce had signed a record deal with Sony Music Entertainment to release his third Spanish-language studio album under Sony Music Latin & debut English recording under RCA Records. That same year, he was honored with the BMI Latin Songwriter of the Year. He was also 1 of the 3 coaches on Telemundo’s La Voz Kids. Royce became the winning coach for the first & again in the second season. He was replaced by Daddy Yankee for season 3.

Royce’s third album, Soy el Mismo, was released on October 8, 2013, & reached number 14 on the Billboard 200. It earned him his second nomination for Best Contemporary Tropical Album at the Latin Grammy Awards of 2014. He was then nominated for 3 awards at the 2014 Billboard Music Awards, for Top Latin Artist, Top Latin Album, & Top Latin Song.

On November 24, 2014, Royce released “Stuck on a Feeling” featuring Snoop Dogg as the first single from his fourth studio album, Double Vision. It is his best-performing single in the US to date. In early 2015, he contributed the song “My Angel” to the soundtrack album for the movie Furious 7. Royce’s first album primarily in the English language, Double Vision was released on July 24, 2015. It was preceded by the album’s second single, “Back It Up” featuring Jennifer Lopez and Pitbull. The Spanish-language version of the song was nominated for the Latin Grammy Award for Best Urban Song, making him an 8-time Latin Grammy-nominated performer.

In November 2015, he released the single “Culpa al Corazón” from his upcoming fifth studio album.

On March 20, 2016, Royce starred as Saint Peter in the Fox live musical production of the biblical story The Passion. That same year, he had a recurring role as dancing Coach Vincent on the fourth season of the drama series East Los High. In 2017, he was a judge in the TV show Pequeños Gigantes USA.

While his salary is not known, he has a net worth of $14 million.

There are no any much significant rumors and controversies regarding Prince Royce in the media, except for some breakup rumors in the past.

He has a good height of 5 feet 8 inches. He has dark brown hair color and his eye color is brown. There is no information about his shoe size and dress size.