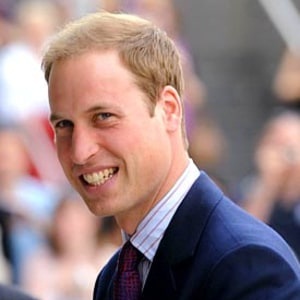 My guiding principles in life are to be honest, genuine, thoughtful and caring. I hope I'm not a tourist attraction - I'm sure that they come here really because St. Andrews is just amazing, a beautiful place. We'll sort of get over the marriage first and then maybe look at the kids. But obviously we want a family so we'll have to start thinking about that.

As with his father, William’s private life became the subject of tabloid speculation, especially around his relationship with Catherine Middleton, who had been one of William’s university flatmates and whom William began dating in 2003.

The relationship between them was followed so closely that bookmakers took bets on the possibility of marriage. Media attention became so intense that William asked paparazzi to keep their distance from Middleton.

It was reported in April 2007 that the couple had split, though Middleton, in June, attended a party at Lulworth Camp as a guest of Prince William and in July the Concert for Diana, which had been organized by Princes William and Harry.

On 16 November 2010, Clarence House announced that Prince William and Middleton were to marry. The couple had become engaged in Kenya in October.

The wedding took place on 29 April 2011 in Westminster Abbey, London. A few hours prior to the ceremony, William’s new titles of Duke of Cambridge, Earl of Strathearn, and Baron Carrickfergus were announced.

His wife’s first pregnancy was announced on 3 December 2012. She was admitted on 22 July 2013 to the Lindo Wing, St Mary’s Hospital, London.

Later that day, she gave birth to a son – Prince George. On 8 September 2014, it was announced that the Duchess of Cambridge was pregnant with her second child. She was admitted on 2 May 2015 to the same hospital where she had first given birth and gave birth to Princess Charlotte.

The couple was blessed with their third child Prince Louis Arthur Charles (On April 23, 2018).

Who is Prince William?

In December 2006, he completed 44 weeks of training as an officer cadet and was commissioned in the Blues and Royals regiment. In April 2008, he qualified as a pilot, completing the pilot training at Royal Air Force College Cranwell.

He then underwent helicopter flying training in order to become a full-time pilot with the RAF Search and Rescue Force in early 2009. William’s military service with the British Armed Forces ended in September 2013.

On 3 June 1991, William was admitted to Royal Berkshire Hospital after being accidentally hit on the side of the forehead by a fellow student wielding a golf club.

He did not lose consciousness, but suffered a depressed fracture of the skull and was operated on at Great Ormond Street Hospital, resulting in a permanent scar.

William was educated at independent schools, starting at Jane Mynors’ nursery school and the pre-preparatory Wetherby School. Following this, he attended Ludgrove School and was privately tutored during summers by Rory Stewart. At Ludgrove he also participated in football—along with swimming, basketball, clay pigeon shooting, and cross country running.

William sat the entrance exam at Eton College and was admitted. There, he studied Geography, Biology, and History of Art at A-Level.

After completing his studies at Eton, William took a gap year, during which he took part in British Army training exercises in Belize, worked on English dairy farms, visited Africa, and for 10 weeks taught children in southern Chile.

By 2001, William was back in the UK and had enrolled at the University of St Andrews. He embarked on a degree course in Art History, later changing his main subject to Geography, and going on to earn a Scottish Master of Arts degree with upper second class honors.

While at university, he represented the Scottish national universities water polo team at the Celtic Nations tournament in 2004. He was known as “Steve” by other students to avoid any journalists overhearing and realizing his identity.

To prepare for eventually managing the Duchy of Cornwall Estate, in 2014 he enrolled in a vocational agricultural management course at Cambridge.

Having decided to follow a military career, in October 2005 Prince William attended the four-day Regular Commissions Board, where he underwent selection to judge his suitability to become an army officer. Having passed selection, he was admitted to the Royal Military Academy Sandhurst in January 2006.

Successfully completing the course, William was commissioned as a Second Lieutenant at Sandhurst on 15 December 2006. William officially received his commission as a lieutenant at midnight. He followed his younger brother into the Blues and Royals as a troop commander in an armored reconnaissance unit, after which he spent 4 months in training for the post at Bovington Camp.

Once officially enrolled and commissioned in the armed forces, William wanted active service but was denied. William was then seconded to train with the Royal Navy for two months, in 2008. He spent a day on submarine HMS Talent. During a 5-week deployment on HMS Iron Duke in the Caribbean, he took part in a joint operation with the United States Coast Guard that identified and captured a speedboat carrying 900 kg of cocaine worth about £40 million. The ship also took part in other raids.

In January 2009, William transferred his commission to the RAF & was promoted to Flight Lieutenant. He trained to become a helicopter pilot with the RAF’s Search and Rescue Force. On 26 January 2010, he transferred to the Search and Rescue Training Unit at RAF Valley to receive training on the Sea King search and rescue helicopter; he graduated from this course on 17 September 2010.

His first rescue mission was a response to an emergency call from the Liverpool Coastguard on 2 October 2010. In November 2011, he participated in a search and rescue mission involving a sinking cargo ship in the Irish Sea. William deployed to the Falkland Islands for a 6-week tour in March 2012. In June 2012, he gained a qualification to be captain or pilot in charge of a Sea King. His active service as an RAF search & rescue pilot ended in September 2013.

In 2014, it was announced that he would take on a full-time role as a pilot with the East Anglian Air Ambulance (EAAA). On 13 July 2015, the Duke started his new job. Upon graduation from university, William began to undertake public duties of his own, as well as obtaining private work experience by interning in land management at Chatsworth House and in banking at HSBC.

At 21, he was appointed as a Counselor of State. In 2009, a private office was set up for William by his grandmother. He succeeded Lord Attenborough in 2010 as the fifth president of the British Academy of Film and Television Arts.

In March 2011, William visited Christchurch, New Zealand, after the recent earthquake. Upon leaving New Zealand, he traveled to Australia, to visit areas badly affected by flooding in the states of Queensland and Victoria. On 2 November, the Duke and Duchess visited the UNICEF Supply Division Centre for supplying food to malnourished African children in Copenhagen, Denmark. In September 2012, they toured Singapore, Malaysia, Tuvalu and the Solomon Islands as part of the Queen’s Diamond Jubilee celebrations.

In 2015, he visited China. Chinese President Xi Jinping welcomed him as he began the first visit to the mainland by a member of the British royal family in almost 3 decades. William is also an active member of various charity and humanitarian works, environmental causes, sports, etc.

William has often been dragged into rumors and controversies. He was drawn into EU controversy. He and Kate’s ski holiday also hit some controversy. There were also rumors that he and Kate had been headed for a divorce.

Do you know that Prince Harry and Prince William have a step brother called Tom Parker Bowles?