Posted by MarriedBiography Posted on July 20, 2021 | In Married , Relationship
Share this 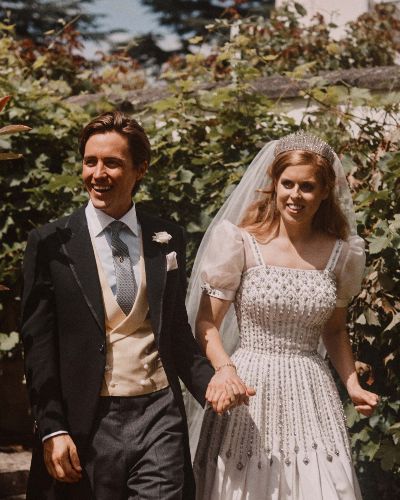 “I can’t believe it has been 1 year. Every second of every day since has been so full of joy, happiness, laughter and love. You are the kindest, loveliest and most beautiful person in the world. Thank you my darling for every second.”

In the pictures, Princess smiles in a pair of sunglasses while posing outside. The couple welcomed their first child some time ago. The couple walked down the aisle in a scale-down ceremony that was attended by close family and friends. Their wedding canceled in May 2020 due to the COVID-19 pandemic. They shifted their wedding to July 17, 2021.

For their wedding, Beatrice wore a vintage Norman Hartnell dress loaned by the queen. Likewise, the dress crafted from peau de soie taffeta with organza sleeves and trimmed with duchess satin was worn with a 1919 Queen Mary diamond fringe tiara that the queen wore on her own wedding day.

In 2009, she had a brief role in a movie titled The Young Victoria. She also founded a charity to support young people to develop skills. It is called Big Change and was created with her six friends. Read more bio…