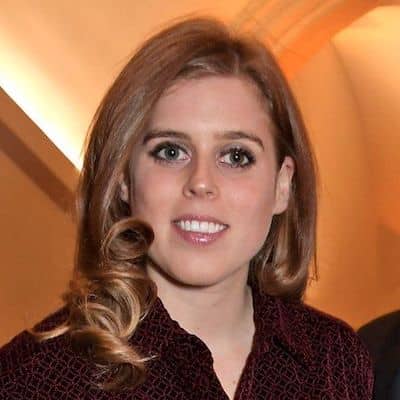 Princess Beatrice is currently married. She exchanged vows with Edoardo Mapelli Mozzi on July 17, 2020. Her husband is an Italian property developer and their engagement was done in Sep 2019.

As per the sources, they started to date from 2018 and were seen together in March 2019 at a fundraising event in London.

Their wedding took place at the Royal Chapel of All Saints, Royal Lodge, Windsor. At first, it was supposed to be on 29 May 2020 at St James’s Palace. But due to the pandemic, the ceremony was postponed.

Her gown was a remodel of Norman Hartnell’s dress and she wore the Queen’s, Mary Fringe Tiara.

This Royal couple is expecting their first child. On 19 May 2021, they shared the news that they will welcome their kid in autumn.

Recently, she was seen with her small baby bump wearing a cranberry wrap dress, tights, and boots. She also styled it with a fitted black jacket.

Edoardo from his past affair has a son named Christopher Woolf who was born in 2016.

Princess Beatrice was involved in a romantic relationship with Paolo Liuzzo in 2006. It was a short romance and they shortly broke up. She then dated businessman Dave Clark for ten years.

Who is Princess Beatrice?

In 2009, she had a brief role in a movie titled The Young Victoria. She also founded a charity to support young people to develop skills. It is called Big Change and was created with her six friends.

She was born on 08 Aug 1988 in Westminster, London, England, UK. Her full name is Beatrice Elizabeth Mary Mountbatten-Windsor.

The name of her mother is Sarah, Duchess of York and her father’s name is Prince Andrew, Duke of York. They separated in 1995.

Princess’s ancestry is Asian and has a younger sister, Princess Eugenie. Her Cousins are Peter Phillips, Zara Tindall, Prince Harry, and Prince William.

As per her academics, she attended Upton House School and Coworth Park School. She then enrolled at St George’s School from 2000 till 2007.

Due to dyslexia, she remained at the same school and passed out with A-Levels. She then went to Goldsmiths, the University of London in 2008.

From here, she graduated in 2011 with a BA in history and history of ideas.

Princess Beatrice was a sales assistant at Selfridges. She at present works at Afiniti as Vice President. She is in the Partnerships and Strategy there.

Her involvement with several charities is also remarkable. She supports a nonprofit organization called the Kairos Society. Also, she is with the Outward Bound Trust as its Trustee.

In 2002, she went to Russia to visit the children who were suffering from HIV. She participated in the London Marathon in April 2010 and raised funds for Children in Crisis. Her other linked charities are Franks Family Foundation, Helen Arkell Dyslexia Centre, etc.

At present, from her career, her estimated net worth is around $6 million US. However, her salary and other earnings are unknown.

This Royal member is keeping herself away from rumors and any desperate scandals.

Regarding Princess Beatrice’s body features, her height is 5 ft 7 inches and her body weight is 46 kg.

Moreover, her eyes are blue and her hair color is Burnette. She has a fair skin complexion.