Princess Mae is a Filipino Instagram star who is in a relationship with Chris. Her first daughter Cleo was born in 2016 and now she is pregnant with baby 2.

Princess Mae is in a relationship with Chris with Instagram handle ‘misterwontons’. In August 2019, Princess revealed that she is pregnant with her second child.

Her brother Bretman had intuitions of her getting pregnant which later became reality when she revealed about her pregnancy with Chris. 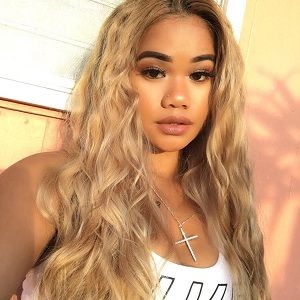 Who is Princess Mae?

Currently, she has more than 2.5 million followers on Instagram. Mae is also a YouTuber with 1.27 million subscribers on the channel name Loving US.

Princess was born on May 27, 2000, in the Philippines. Talking about her nationality, she is Filipino-American. She is of Filipino ancestry.

Later, she grew up in Hawaii, the United States along with her parents. Her father expired recently. She posted a series of photos of him. Being a sister of a social media star, she also developed her interest in social media from her childhood.

Talking about her education, she enrolled at James Campbell High School situated in Hawaii.

Princess began her career as an Instagram star. She opened her YouTube channel on 18th May 2018. Her first video was Days With Princess Mae. It was her first vlog.  She uploads videos with her boyfriend and daughter Cleo.

Currently, she has more than 2.3 million followers on Instagram and 272k followers on Twitter. She is famous as the sister of the well-known Vine and Instagram sensation Bretman Rock.

Bretman has almost 14 million followers on Instagram. Besides this, she has firstly appeared in her brother’s first challenge video on YouTube in 2015. As of now, her Instagram followers are increasing day by day.

How much is Princess Mae’s Net Worth, Salary?

There was a rumor that she broke up with her boyfriend Chris after revealing her second pregnancy with him. She removed her YouTube videos at that time. Also, they unfollowed each other at the time.

Adding up more info as of 2022 her Youtube channel has more than 1.31 Subscribers.