Who is Princess Sab Zada Dating?

As there is no information about her dating life, we can safely assume that Pasabist is not seeing anyone right now, and we can indeed say that she is unmarried.

At the moment, she is inclined toward her career rather than involving in relationships. 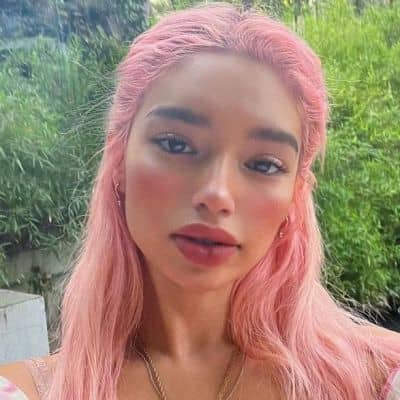 Who is Princess Sab Zada?

Princess Sab Zada aka Pasabist is an emerging model and social media star.

She is also an Instagram star and Youtuber famous for sharing vlogs, hauls, makeup tutorials, and fun and travel videos.

Princess Sab Zada was born in the United States on June 18, 1999. Pasabist is 23 years old as of 2022, holding the American nationality.

She belongs to Hispanic, Filipino, and Chinese descent. According to the astrological chart, She has a birth zodiac sign of Gemini.

Further info on her parents and siblings has not been shared by her.

Coming towards her educational life, she earned an associate’s degree while studying in high school. Later, the star enrolled at Texas State University.

Princess Sab Zada is a social media star. She is present on Instagram under the username, @pasabist which has garnered a large number of fan followings.

Furthermore, she soared to fame after posting glamorous selfies and chic simple fashion modeling. She is seen uploading her photos and videos with a g7x mark ii camera. She started to post in January 2017.

On the other hand, Pasabist is a model and a Youtuber as well. She has worked with LA Models and SLASH Management. The star is even famous for her salmon sushi-colored ‘Pink-Orange’ hair resembling a real-life anime and cartoon character.

She created her Youtube channel ‘Passabist’ on April 1, 2014. She was able to amass 1,021,787 views and 43.6K subscribers by mid-June 2020. The bio on her channel mentions that she posts her latest and updated videos every Tuesday and Thursday at 12 PM/PST.

At the moment, the most recent video on her channel is ‘My Everday Makeup Routine’ which was posted on April 2, 2022. The video has garnered more than 18.6K views.

Until May 25, 2022, the video titled, ‘Going Out of My Comfort Zone ft. @TigerMist || PASABIST is the most viewed video among all of her videos. It has received around 662K views.

In addition, her other videos include, How I Catfish | Easy Everyday Makeup Tutorial & Chit Chat GRWM | Pasabist, BUILDING A HOLIDAY GINGERBREAD HOUSE TUTORIAL, Been a while, hello,@ShopCider Love Wonderland Haul video + walk with me into a forest to chat 🌲 and others.

The net worth of Instagram star, Pasabist is estimated to be between 1 to 5 million USD as of 2022. Moreover, Princess Sab Zada’s salary and income are yet to be calculated.

Princess Sab Zada has not been part of any rumors and controversies as she is able to maintain a clean profile. If further rumors or controversies related to her are found, it will be further updated.

Princess Sab Zada is 5 feet 8 inches tall while her weight is still unknown. Also, the details of her body measurements including bust, waist, and hip size have not been disclosed.

In addition, she has sushi-colored ‘Pink-Orange’ hair and brown eyes.

Pasabist is present on Instagram under the username, @pasabist having more than 670K followers.

On the other hand, she is also available on Twitter and Tiktok, having over 50.2K and 286.5K followers. She is seen actively posting her lip-sync, dance, and make-up tips videos on her Tiktok account.

Likewise, Princess Sab Zada has a Youtube channel, under the name, @pasabist, enriched with over 50.1K subscribers.