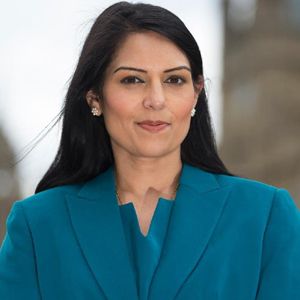 We must put behind us the tribalism and divisions seen in the referendum between leave and remain and focus on defining our place in the world ,healing our wonderful nation and putting core conservative principles and values into action.

What is the relationship of Priti Patel?

Priti Patel is married to Alex Sawyer in July 2004. Her husband Alex is a Nasdaq NLX marketing consultant. The couple is happily married and has a son named Freddie Sawyer born in August 2008.

The couple met at her office while she served as an international development secretary.

There is no sign of any separation between them and there is no extra affair as far as known.

Who is Priti Patel?

Priti Patel is a member of the conservative party and is famous as a politician. She is regarded as being ideologically on the party’s right-wing and has been described as a Thatcherite.

Priti was also elected as the first member of parliament for the Witham Constituency in Essex. She has been an active member for 16 years.

She is a Secretary of State for International Development and Conservative Member of Parliament for Witham & Home Secretary.

Her father is Sushil Patel and her mother is Anjan Patel. Her parents are from Gujarat, India, and were immigrants from Uganda. ‘

Her parents established the newsagent’s chain in London and South East England. Priti was raised in South Harrow and Ruislip and holds a British nationality.

Initially, Priti was interested in business investment and trade.

Priti went to a girl’s school for her initial education, Watford Grammer School for Girls. Later she attended Keele University and studied Sociology and Social Anthropology. Priti completed her post-graduate from the University of Essex.

Andrew Lansley recruited Priti Patel at Conservative Central Office. Later she moved to the Conservative Party and worked with media relations in London. Priti worked for a PR consulting firm with Weber Shandwick.

Patel was one of the seven Shandwick employees who worked on British American Tobacco, a major account as stated by The Guardian.

Priti stood as the Conservative candidate for Nottingham North, losing to the sitting Labour MP in the general election of 2005. She also worked for alcoholic beverages in corporate relations for four years.

Priti was considered one of the “Class of 2010” who represented the party’s “new Right” along with fellow Conservative MPs Kwasi Kwarteng, Dominic Raab, Chris Skidmore, and Elizabeth Truss.

Priti was presented with a “Jewels of Gujarat” award in Ahmadabad, India Patel voted to support Cameron’s planned bombing of Islamic State targets in Syria.

In 2016, she was appointed as International Development Secretary. She announced that Britain would contribute £1.1 billion to a global aid fund used to combat malaria, tuberculosis, and HIV/AIDS.

In November 2017, Priti has to resign from the post due to an inappropriate allegation of meeting with Israeli officials.

In November 2019, the news was that she rescued British orphans from Syria.

According to a report released in January 2020 by the Adolescent Empowerment and Innovation Project, Patel’s strategy to fight youth radicalization was “madness,” and the Home Office was “disengaged.”

Priti has contributed a lot to the government of the U.K. and initiated many programs in favor of the general public.

She was also honored with many awards including contribution to UK India relations and she was awarded the Outstanding Contribution Award.

She was also honored with Pravasi Bhartiya Samman. She also won Asian Trader Award for longstanding and tireless campaigning to support small shops and convenience stores.

Priti is a renowned politician and has played many major roles in his field. She has a net worth of $3 million as of 2022.

Once Priti was in a controversy regarding her meeting with Israeli officials. The matter became very much complicated and she has to resign as International Development Secretary.

Priti Patel has black hair and brown eyes. Her height is 5 feet 6 inches and her weight is unknown. Also, there is no information about her body stats.