Priyanka Chopra Jonas Response To Love-Hate Comments For Her Revealing Dress in Grammy 2020!

Updated On November 9, 2021 | In controversy , Interesting Facts
Share this 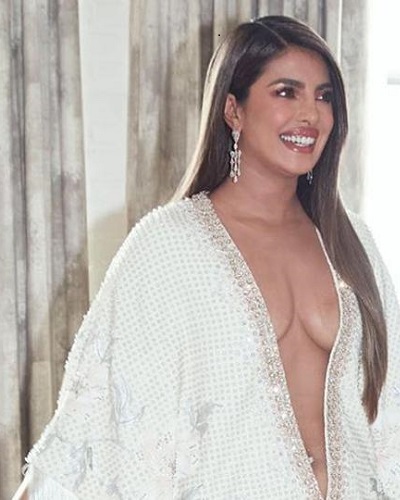 Priyanka Chopra Jonas has recently made the headlines for the revealing dress she wore to Grammy’s Awards 2020. Her stunning look at the red carpet was jaw-dropping for her fans and followers. Her look got a love-hate reaction for her red carpet look. The actress gave her answers to the response she got for her Grammy’s look.

The American singer Nick Jonas and his Priyanka Chopra dressed up to step in the red carpet of Grammys Award 2020. The Jonas brother was on the nomination list and also performance for the night.

The brothers had nominations for Best Pop Duo/Group Performance for their single “Sucker.” Jonas and Chopra attended Grammys Award for the first time as a couple. This was the debut for the couple as a married pair on the Grammys.

However, the long white dress with the deep V cut caught all the attention from the award show. Chopra wore a white long-sleeved deep-V Ralph and Russo dress with tassels. Jonas came to the red carpet a gold suit by Ermenegildo Zegna. The actress also shared the picture with all the family with the caption which reads:

As the deep cut dress of Priyanka was getting all the attention, she got both love and hate comments. One of the people commented on her picture with the positive response saying:

“Ur one of the kindest, most giving, most loving souls I’ve ever known,”

Meanwhile, many other fans showered her with all the love dropping heart emoji on the comment sections. On the other hand, some of the fans did not have a nice response to her look. Some even went to say her dress was the resemblance to a green Versace which Jennifer Lopez rocked 20 years back. One of the Twitter users made a tweet about her dress saying:

“@priyankachopra wat an awful choice of dress. Could the cleavage hv been contoured ne more! When #JLo wore a similar style, she executed the look in every way possible. Goes 2 shw 1 shud wear clothes that compliment.”

The response for her dress was mixed as some were gushing about the look, meanwhile, some called it a bad choice.

Pj’s reaction to the response

After getting thousands of opinions for her to look at Grammy’s 2020, Chopra could not stop herself from writing her words. The actress went up to her Instagram account, where she shared portrait with her response which reads:

“I seem to be thinking what a crazy beginning of the year it’s been, and we are only in January. Love the ones you love. Live the life you want to live…with all the troubles in this world at the moment, be kind to yourself and everyone around you. I’m so grateful for the kindness I have received, and even when I have not…I some how have. Be kind to the ones around you. It matters. Life is a gift.”

You may also read- Catherine Paiz And Austin McBroom From ACE Family Announced Their Third Pregnancy!

One of the highly paid and Padma Shri honored Priyanka Chopra is an Indian actress, singer, model, film producer, and philanthropist. She is best known as the winner of Miss World 2000 pageant. She is commonly also known for her role as Alex Parrish on the ABC thriller series Quantico. See more bio…