Posted on December 3, 2021 | In Married , Relationship , Wedding
Share this 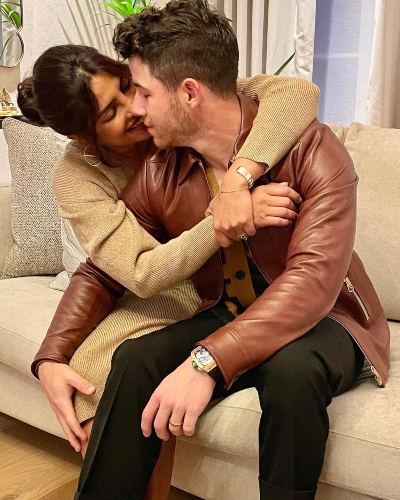 On 2nd December 2021, we got a peek at their romantic dinner featuring flowers and candles. Likewise, we can see larger candles and rose petals displayed on the floor on either side of a giant, lit-up block letters spelling the word ‘FOREVER” where E is decorated with flowers.

Nick shared the video on his Instagram from their intimate and professionally decorated dinner. Similarly, Priyanka posted an Instagram photo of the table showing all the beauty. On 1st December 2018, they walked down the aisle in her native India in a Hindu ceremony. Also, a Christmas vow exchange and hosted a few receptions that month.

On 29th November 2021, they looked playful during their date night at Fashion Awards 2021 at the Royal Albert Hall in London. Few days before they were rumored to be divorcing when Priyanka removed her surname both Chopra and Jonas from her social media. Priyanka said,

“Since we married, people questioned our marriage. They were like, ‘Oh, it’s a publicity stunt. How could it be?’ I didn’t even know how famous Nick was. All I knew is that he was Kevin Jonas’ baby brother. In all sincerity, I love that I married a man who, like myself, values family. If you don’t know, we’re the only couple who doesn’t have kids yet.”

She is best known as the winner of the Miss World 2000 pageant. She is commonly also well-known for her role as Alex Parrish on the ABC thriller series Quantico. Read more bio…

Why was singer Ari Lennox arrested in the Amsterdam airport?
Tags : Actress Singer