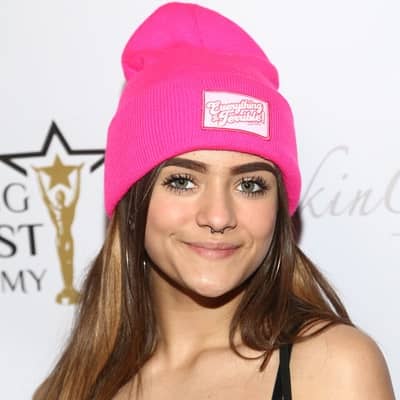 Prymrr is still at her young age to be in any relationship. She is single and is focused on her career and studies. Previously also she has never seen dating anyone.

Prymrr is an American dancer, rapper, singer, and internet sensation. She is well-known for her performances in Sia music video.

Furthermore, that star has now launched her own youtube channel and is also popular for its content.

Prymrr was born on October 6, 2005. Her birthplace is in Bakersfield, California, United States. Her name was given by her mother and her dance teacher.

Prymrr’s parents have divorced when she was young. And she was raised by her mother LisaAnn LoBasso. Prymrr has two sisters Jasmin and Xitlali. She has also spent some time in India when she was little.

She saw a ballerina on T.V. and was interested to learn it. Her first ballet teacher was a family friend and has opened a Royal Academy of Dance studio. Then she also joined it. The star was only 2 years old when she started doing ballet. Afterward, she moved onto other dance styles. Her mum has always supported her from her childhood to built her career.

Prymrr is currently studying in the ninth grade in a high school.

Puhrymrr started her dancing career professionally when she was about nine yrs old. But she used to sing and rap when she was five. She was a part of Abby Lee Boot Camp organized by dance coach Abby Lee Miller. Then she appeared on ‘Dance Moms’ alongside popular dance stars Maddie and Mackenzie Ziegler. And in late 2016, she was featured in the music video of Pussy Riot’s ‘Straight Outta Vagina’.

No sooner, she gained popularity and got the chance to post as the role of a lost girl in a music video for an RCA mega-artist. She is also well known for the Pussy Riot music video. Moreover, she appeared with the popular dancer Sia in her music video for the song ‘Never Give Up’ in Jan 2017. It was so popular and received over 80 million views. After it,  Prymrr’s fame increases and she launches her own musical career.

Prymrr joined Youtube on Feb 26, 2017, after her popularity from Sia music video. She posts various vlogs, dance videos, challenges, reactions, Q&A’s on her channel. Her first video was “WORLDS BEST Kid Female Rapper!! 11-YEAR-OLD RAPS Eminem! And KILLS It! VIRAL!”. Furthermore, the video was posted on Feb 27, 2017, and has collected 23K views.  Likely, her popular video on the channel is”Getting my belly button PIERCED at 13!!” with 485K views.

The star is also well known for her rap compilation that she posted on her channel. GAMBLiN’ was her first music video and recently she uploaded her second song’s official music video ‘Take Over’ in February 2019.

Her net worth is around $400,000 (USD). Similarly, the star also has her merch in Rosexproject.com. There she sells various ranges of clothing, make-up bags, and phone cases along with her logo.

The dancer has always focused on building her career and hasn’t been part of any such rumors or controversies in the media.

Likely, she has dark brown colored eyes with blonde hair.

Her official Tik Tok account also holds 1M followers with more than 43M likes. Similarly, she has her own YouTube channel with 91K subscribers.