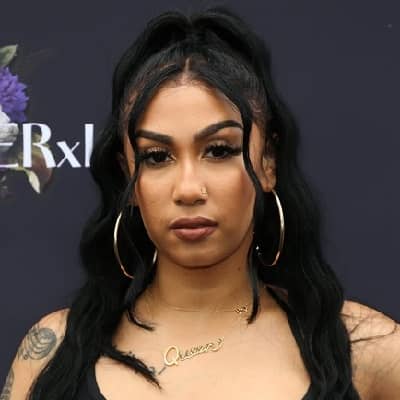 Queen Naija is in a relationship with YouTuber Clarence White.

They started dating in 2018. The couple is often seen together and also shares their various pictures on social media. They welcome their child Legend Lorenzo in Jan 2019.

Queen was married to YouTuber Christopher Sails in the year 2017. The duo met at a high school basketball game and started dating in April 2013.

The couple also ran the YouTube channel ‘Chris and Queen’. They have a son named Chris Sails Jr who was born on 17th February 2015. However, the couple split in 2017 and divorced in 2018.

Who is Queen Naija?

Queen Naija is one of the popular American personalities, singer, songwriter, and also YouTuber.

She gains popularity after her music and makeup videos, vlogs, and daily life videos that she posts on her self-titled youtube channel.

The reality star was born on October 17, 1995, as Queen Naija Bulls. Her birthplace is Detroit, Michigan, USA.

She grew up with her two younger siblings Tina and Terrell. Both of them also have a joint YouTube channel, Tina & Terrell.

Her father was from Yemen. She hasn’t disclosed her parent’s names. “Queen Naija” name was given by her mother. The name was inspired by her grandmother as Queen was her name. Likely “Naija” represented her father’s name.

She has mixed ancestry of Arab, Black, and Italian. Likely she also mentioned having little Indian mix ancestry.

Queen came into prominence appearing in the thirteenth season of American Idol. She didn’t get on the top 30. Similarly, she has also auditioned two years earlier but she couldn’t go to the next round.

After the show, she started working as a security guard and also start her internet career. It was in August 2016, Naija launched her YouTube career alongside her then-husband, Christopher Sails. However, the couple gets separated and the channel was given to Sails by Naija. As of now, she has her own youtube channel with over 4M subscribers.

Naija has built a great career and earned a huge wealth through it. Her net worth is around $4  million as of now.

Likewise, she makes approximately $180,000 annually from advertisements on her YouTube video. Furthermore, the singer also earns from her merchandise.

The singer hasn’t been part of any reasonable dispute or controversial news. Similarly, there is not any news concerning his rumors about his non-public and personal or professional life.

Naija has an average height of 5 feet and 1 inch weighing around 6 kg.

She has natural black-colored hair and often tends to dye blonde, blue, and other colors.  Similarly, she has beautiful pair of dark brown eyes.

Her official Tik Tok account also holds 16.3M followers with more than 16.4M likes. Similarly, she has her own YouTube channel with 4.93M subscribers.