Quincy Brown dated Socialite and actress, Amber Rose, they were in a short-lived relationship in 2014. But, the relationship didn’t go well so they decided to break up.

Similarly, he dated British television personality, Kelly Osbourne, they were in a relationship that was believed to have been a fruitful one but the couple did not make it very far and broke up in the same year in 2014.

Moreover, he dated singer and actor, Keke Palmer, who was speculated to have started dating on the set of Brotherly Love in 2015.

However, according to their loved-up social media posts, they had already been dating each other since 2013. Their relationship ended a few years later in 2017.

As of now, he is possibly single. 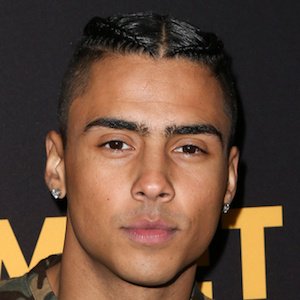 Who is Quincy Brown?

Quincy Brown is an American actor, entrepreneur, and artist. He is well known for his first debut starring role in the 2015 film Brotherly Love, and his music single “Friends First“.

Currently, he is a regular on the television musical drama Star.

Quincy was born in New York City, New York, the United States on June 4, 1991, to parents Al B. Sure! and Kim Porter. His father is a  singer, songwriter, and record producer.

He belongs of American nationality and mixed (African- American) ethnicity. His birth sign is Gemini. Talking about his education, he attended Calabasas High School.

In talking about his profession, Quincy Brown made his debut appearance on TV, while he was a teenager. In 2008, he was also featured in the show, ‘My Super Sweet 16,’ which was telecast on the ‘MTV’ channel. It was a show that focused on teenagers, whose parents arranged lavish birthday celebrations.

In 2012, he started his career modeling, by participating in the ‘Gaborone Fashion Weekend,’ held in Botswana.

Likewise, he has also modeled for major brands such as ‘Luis Vuitton,’ ‘Off-White,’ ‘Rick Owens,’ and ‘Christian Louboutin.’ Similarly, he advertises brands through his social media accounts too.

In 2014, he also released his single, ‘Friends First,’ which was one of his most popular tracks. The video of the song featured rapper, French Montana.

Moreover, he also plays ‘Derek Jones,’ who is the love interest of one of the lead characters and is also a civil rights activist. It has made Brown highly popular among TV viewers. Therefore, he has found success as an entrepreneur.

He started the production company, ‘FourXample.’

Besides that, he owns his watch collection, ‘Chalk by Quincy,’ and a jeans line with the name, ‘Embellish.’ He also owns a tech start-up company.

There is no information about his salary. His net worth is around $600 thousand as of 2022.

There was a rumor that he was dating Kourtney Kardashian. Currently, there are no such rumors and controversies.

Talking about his body measurements, Quincy Brown has a height of 6 feet 2 inches. Additionally, he weighs is 78Kg.

Quincy’s hair color is black and her eye color is dark brown.