His career spans with a record 80 Grammy Award nominations, 28 Grammy, and a Grammy Legend Award in 1992.

Quincy Jones was in a relationship with Jeri Caldwell from an early age, they had been together and Jeri had followed Q all the way to Paris where he was tutored by Nadia Boulanger.

The couple got married in 1957 and had a daughter named Jolie Jones (Jazz Vocalist). However, their relationship didn’t last very long after they moved to Paris and they filed for divorce in 1966.

Then, he was in a relationship with fashion model Ulla Andersson. They met when she was only 19 years old at a party by Trans World Airlines to honor Frank Sinatra. Later, they moved in together in California. On October 17, 1968, the couple got married and had 2 children, Martina Jones (Model) and Quincy Jones III (Swedish Music Producer).

After living together for several years, the couple separated in 1974 as Quincy wanted to marry his longtime partner Peggy.

Moreover, he dated a relatively younger model, singer, and actress, Naomi Campbell, between 2007 and 2011. He also dated model Amber Rose in 2014. Therefore, Jones shocked everyone when he stated in an interview he had dated Ivanka Trump. 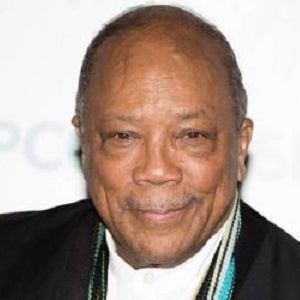 Frank Sinatra took me to a whole new planet. I worked with him until he passed away in '98. He left me his ring. I never take it off. Now, when I go to Sicily, I don't need a passport. I just flash my ring.

Jack had a great sense of humor. He still does. He's crazy and a beautiful guy. I always think it's nice when somebody who's paid his dues, like Jack, makes it. But he hasn't really changed much.

When I was studying with Nadia Boulanger, the legendary composer, and teacher, in Paris, she used to say "Your music can never be more than you are as a human being". And B.B. King was a great human being.

Who is Quincy Jones?

Quincy Jones is an American record producer, musician, composer, and film producer. Likely, his career spans with a record 80 Grammy Award nominations, 28 Grammy, and a Grammy Legend Award in 1992.

When Jones was young, his mother suffered from schizophrenia and was admitted to a mental hospital, which is why his father took divorce from her and remarried.

Talking about Quincy’s education history, he attended the Garfield High School in Seattle and was involved in music all through his high school. He formed a band with his fellow schoolmates and won a scholarship to Berklee College of Music, Boston in 1951.

Jones suffered from a life-threatening brain aneurysm in 1974 and since his friends and family believed that he did not have much time left, they arranged for his memorial service, which he attended himself.

Talking about his profession, Quincy Jones arranged and played trumpet for Lionel Hampton and then became a freelance arranger for jazz sessions. Later, he became the musical director for Dizzy Gillespie’s overseas band tour and moved to Paris and worked for Barclay Records.

In the year 1959, he got his first big international opportunity when he led a band for the European production of Harold Arlen’s blues opera, ‘Free and Easy’. He returned to New York to work as an executive with Mercury Records.

By the mid-1960s, Jones became proficient in his art and started to produce his own pop records and composed for films and television, which helped African-American music gain more and more popularity in Hollywood.

Jones finally founded his own production company, Qwest Productions in 1975. He got an opportunity to arrange and produce albums for veteran artists like Frank Sinatra and other prominent pop artists. In the year 1978, he produced the soundtrack for the musical adaptation of ‘The Wizard of Oz’, called ‘The Wiz’, which starred much-acclaimed musical artists like, Michael Jackson and Diana Ross.

Michael Jackson and Jones collaborated again in 1982 and worked on Jackson’s ‘Thriller’. The album sold 110 million copies and became the highest-selling album of all time, which made Jones the most powerful record producer in the industry.

He appeared on NBC’s ‘Last Call with Carson Daly’ to discuss various aspects of his abundant career in 2009. He also performed at a private reception for USAA employees in Texas in the same year.

He won Outstanding Achievement in Music Composition for a Series (Dramatic Underscore) for Roots (1977) at Primetime Emmy Awards, he won Top Box Office Films for The Color Purple (1985) at ASCAP Award. Likewise, he won the Humanitarian Award at BET Award.

Similarly, he won the Most Compelling Living Subject of a Documentary for Quincy (2018) at Critics’ Choice Documentary Award. He won Best Rap Performance by a Duo or Group for Quincy Jones: Back on the Block (1990), Best Music Video, Short Form for We Are the World (1985), Best Recording for Children for E.T. the Extra-Terrestrial (1982) at Grammy Awards.

As of 2022, he has an estimated net worth of around $500 million and he has earned that sum of money from his professional career.

There was a rumor circling about the on and off for years that Quincy molested Tevin when he was a teenager. However, the “Can We Talk’ singer is clear: That just never happened.

Quincy Jones has a height of 5 feet 6 inches. Additionally, he weighs is 83Kg. Quincy’s hair color is black and his eye color is dark brown.

Being an American musician Quincy has a huge fan following rate. He has been active in social sites and YouTube.