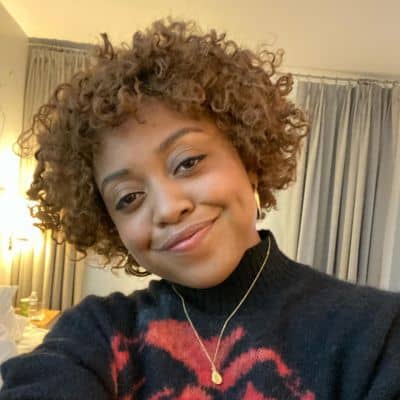 What is the relationship of Quinta Brunson?

It seems the star does not prefer sharing her personal life publicly.

Who is Quinta Brunson?

Brunson is widely famed for her self-produced Instagram series, Girl Who Has Never Been on a Nice date.

Moreover, she has also acted in the series, iZombie, A Black Lady Sketch Show.

She is also the creator, executive producer, writer, and star of the ABC comedy Abbot Elementary.

Quinta Brunson was born on 21 December 1989. At present, she is 32 years young star. Likewise, her birthplace is Philadelphia, Pennsylvania, the USA.

Not much is known about her father and mother’s details, Quinta has been secretive about her family details. Moreover, she has four siblings whose details are still unknown.

Talking about her nationality, Brunson holds an American identity whereas her ethnicity is American-African.

Regarding education, the comedian studied at the Charter High School for Architecture & Design. Later, she attended Temple University and took classes at Second City in Chicago.

However, Brunson dropped out shortly after starting her career.

Quinta started interacting with her fan by posting comedic videos on her Instagram in 2014.

Her video title, Girl Who Has Never Been on a Nice Date series went viral and grew her digital fan base.

The star has also worked as a video producer for BuzzFeed Video after first freelancing for the company.

And co-starred in her first network pilot, the CW pilot The End of the World as We Know It.

The well-loved personality then portrayed the role of Dr. Charli Collier and her twin sister, Laila on the supernatural comedy-drama series, iZombie. Also, she was featured in the HBO sketch comedy series, A Black lady Sketch Show.

A famed star, Brunson has earned a handsome amount of money from her profession. She has been active in her profession from the year 2014 till the present.

It is reported that Quinta Brunson has an estimated net worth of $1 million.

However, the producer has not disclosed her exact salary, earnings, and assets details till now.

Quinta has never been part of any controversial matter or rumors till now. The star has been preoccupied with her professional and private life.

It seems that Brunson prefers enjoying her personal life and does not want to merge it with her professional life.

32 years young star, Quinta has beautiful looks and an admirable personality. She stands at a height of 5 feet. Also, she has a balanced body weight of 55 kg.

Furthermore, Brunson has black eyes whereas her hair is brown.

Nevertheless, the comedy star has never mentioned other physical details in the public yet.

Regarding her social media presence, Quinta Brunson is an active personality on social media. Quinta has more than 934k followers on her official Instagram account @quintab.

She is also active on Twitter with around 547.9k followers. The star has more than 85.7k subscribers on her official YouTube channel presently.

Moreover, Brunson is also available on Facebook with nearly 1.2 million fans and supporters.