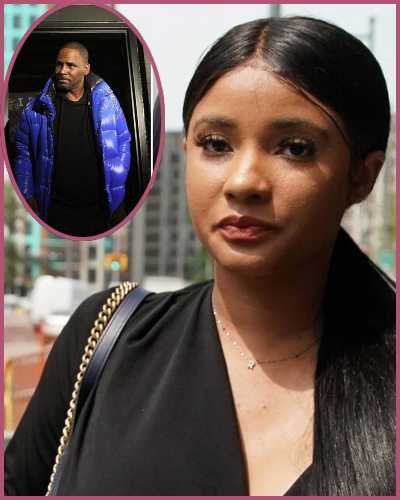 Is convicted sex trafficker R. Kelly and his victim fiance Joycelyn Savage expecting a baby together?

This month Joycelyn Savage announced the shocking news to the world that she’s expecting a baby with the musician R. Kelly. Savage first disclosed the announcement in her short book, Love and Hoy of Robert, which is released on 12 August on Amazon.

In the book, she has written that when she felt sick, she thought she contracted COVID-19 but instead learned “the most amazing news,” that she was expecting a baby.

She penned in the book,

“It was a happy day but an incomplete time in my life. Today I am grateful to God for giving me the most precious gift. Robert is extremely excited about the news that I am having a baby and feels sad that Robert will not be able to be here with us,”

“5 months,” with a double red heart emoji and hashtags “babygirl” and “rkelly”

According to her post, it appears that she is expecting a baby girl.

Further, Savage exclusively told ET that she’s five months pregnant and is having a baby girl. She says,

The same day when Savage’s book was released, Bonjean tweeted,

“There is no truth to reports that Joy is releasing a tell-all memoir and she is certainly not pregnant with R Kelly’s child. People are just insane. Carry on.”

Savage, on the other hand, clarified that before Robert went to jail, Robert and she were doing IVF as she was told at that time that she couldn’t have a baby, which his lawyer didn’t know.

“When he got sent to prison, we paused on it and I had them freeze my eggs until I was ready. Once his lawyer did find out, she wanted me to have an abortion because she didn’t feel that now was the time for me to have a child following the 30-year sentence,”

“Me and Robert wanted to have a child for a long time. He is very happy about it, his lawyer isn’t. Once I told her I was keeping my baby, she didn’t want me to announce but I wanted to share the news. I’ve always been there for him even before this new lawyer came into the picture.”

He won Grammy Awards for “I Believe I Can Fly” for three times. He is a former member of the ‘Public Announcement’ R&B group. See more…