Talking about her love life, Rabiya Mateo is in a relationship with her long-term boyfriend, Neil Salvacion. The couple has been dating while they attended the same college in 2014. They are together for more than 7 years.

However, headlines have been made recently after the diva mentioned their relationship status. The fans speculated a breakup after Neil deleted all pictures along with Rabiya from his Instagram account, just days after the Miss Universe competition.

In contrast, Mateo confessed the situation is complicated and they need some time together to solve the issue. Additionally, the star mentioned they are facing a long-distance problem at the moment.

Rabiya has also been linked with Pinoy Big brother alumnus Andre Brouillette but she refused the claims. They are good friends as per the Miss Universe and have the utmost respect for her. They work under Empire Artist Management. 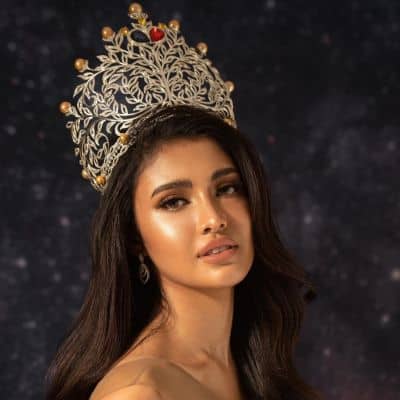 Who is Rabiya Mateo?

Rabiya Mateo is a well-recognized Filipino model and beauty pageant titleholder who was crowned Miss Universe Philippines 2020. Mateo represented the Philippines at the Miss Universe 2020 pageant and finished as a Top 21 semifinalist.

Moreover, she is also an Instagram personality, social worker, education advocate, and entrepreneur as well.

Rabiya Mateo was born on 14 November 1996. At present, her age is 24 years old. Likewise, her birthplace is Balasan, Iloilo, Philippines.

Rabiya is the daughter of her father, Syed Mohammad Abdullah Moqueet Hashmi whereas her mother is Christine Mateo. Moreover, she has a younger brother and his nickname is Mokmok. Her parents divorced in 2001. She was raised with her brother by her mom.

Talking about her nationality, Mateo holds a Filipino identity whereas her ethnicity is Filipina-Indian.

Rabiya started working in SRG Manila Review Center after completing her graduation in the position of lecturer and review coordinator. She is also a member of a charity which supports children living near a dumpsite in Iloilo City. Moreover, the diva represented Iloilo City at the Miss Universe Philippines pageant of the year 2020.

Eventually, Mateo bagged the Miss Universe Philippines pageant of the year 2020 at the West Visayas State University Cultural Center. Additionally, she is actively working as a social worker and entrepreneur as well.

In the question and answer round with the Top sixteen semifinalists, Mateo was asked, “Throughout this journey, you have discovered you are a phenomenal woman who is conditioned for greater. How can you create a positive and lasting impact on the world around you?”. The Diva beautifully answered she needs to stick to her core with her passion for educating people.

Additionally, in the Top 5 finalist, she got to answer the question, “If you can create a new paper currency with that image of any FIlipino on it, dead or alive, who would it be and why?”. Rabiya answered to use the face of Miriam Defensor- Santiago.

A Filipino multi-talented star, Mateo has earned a handsome amount of money from her profession.

It is reported that Rabiya Mateo has an estimated net worth of $1 million. She has garnered most of her fortune after winning the Miss Universe Philippines 2020.

She also endorsed many brands and appears in several TV commercials for cosmetics brands. As per different officials, Rabiya has bought a beautiful house in Iloilo City, Philippines where she lives along with her family.

Rabiya came under the light of media when a video of her apologizing to the nationals of the Philippines came upon the public. She made an apology to her country for her performance in the Costume round of Miss Universe 2020.

Moreover, the round was about representing the country through costumes in which Mateo could not qualify for the next round. She felt greatly disappointed in her performance and apologised publicly.

Other than that, Mateo has never been part of any controversial matter or rumors till now.

24 years old star, Rabiya has gorgeous looks, an amazing shapes, and an admirable personality. She stands at a height of 5 feet 7 inches. Also, she has a balanced bodyweight of 55 kg.

Furthermore, Mateo has brown eyes whereas her hair is black. Her body measurement is 36-24-36 inches(chest-waist-hip) respectively.

Regarding her social media presence, Rabiya Mateo is an active personality on social media. Rabiya has more than 1.9 million followers on her official Instagram account @rabiyamateo.

She is also active on Twitter with around 105.2k followers.

Moreover, Mateo is also available on Facebook with nearly 38.6k fans and supporters.