Rachael Kirkconnell currently appears to be single. During the shows, she dated Matt James who is a real estate broker and charity founder.

However, the pair broke up during the episodes of the After the Final Rose special. Matt is the one who split with Kirkconnell after her racially insensitive past came to the limelight.

She has stated that she has never fallen in love with someone before she met Matt James. So, it is confirmed that James is her first boyfriend. 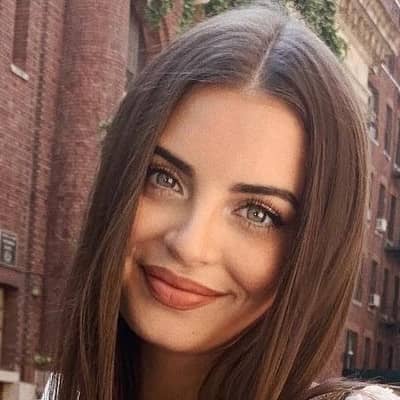 Who is Rachael Kirkconnell?

Rachael Kirkconnell is an American reality television personality and a graphic designer.

She rose to fame after appearing as a contestant in The Bachelor’s 25th season.

She has two younger siblings, a sister named Trinity Kirkconnell and a brother named Greyson Kirkconnell. Kirkconnell’s nationality is American and she belongs to Caucasian ethnicity.

Moving towards her academics, she received her Bachelor’s degree in the year 2019 from Georgia College major in Business Administration in Marketing.

After her graduation, she started her career as a graphic designer. After working for a year she got her career break when she got a chance to appear on one of the biggest reality shows, The Bachelor on season 25.

On the show, she competed with the other 37 female contestants. The show features 28 years old Matt James. Matt is a real estate broker and charity founder from Raleigh, North Carolina.

James is the first black male lead in The Bachelor franchise history. From the beginning, Rachael was one of the strongest competitors on the show, and eventually, after going through weeks of the show she won the heart of Matt James.

While season 25 of The Bachelor was airing in February 2021, Rachael faced controversy after several screenshots of her past racist behavior have come up.

The racist Instagram posts that Kirkconnell had ‘liking’ surfaced all over the internet. Later, she subsequently apologized for her past behavior.

Kirkconnell might have earned a fair amount of fortune from her primary professional career as a graphic designer. In addition, she also appeared on reality shows.

However, she hasn’t yet revealed her exact figure of net worth, salary, and yearly income in the media.

The graphic designer has a fair complexion and a brown pair of eyes with light brown hair color. She is 5 feet 5 inches tall whereas her weight is around 54 kg.