Posted by MarriedBiography Posted on April 27, 2021 | In Dating , Relationship
Share this 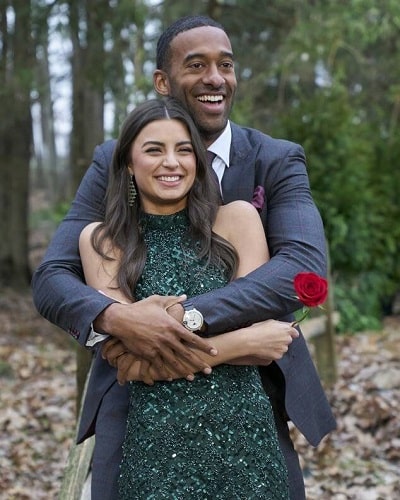 Rachael Kirkconnel and Matt James getting close again! Is there something cooking between them!

Previously, Rachael and Matt had broken up previously but on good terms. Now, they are spotted together in Newport Beach, California. They separated after rumored to be dating another woman behind her back. It seems like they are not over each other yet.

“A lot of time has passed, Rachael still feels something for Matt and vice versa. They were a good match and you can’t just shut feelings off that easily. Matt still cares for Rachael.”

Also read Who is Rachael Kirkconnell? 5 facts about ‘The Bachelor’ star Rachael!

They ended the 25th season of the ABC dating show as a couple. But they announced that they have split already during the After the Final Rose ceremony. Rachael was accused of bullying a fellow high school student for liking black guys. At that time, photos of her attending an old South plantation-themed party were surfaced. An insider revealed,

“Matt and Rachael had a connection on the show, that was very evident. The antebellum ball scandal was at a fever pitch and the awkward final ceremony and Matt’s breakup was a result of all that. There was a ton of pressure on Matt and he did what he felt was right at the time.”

Matt James is a real estate broker and TV personality. James is well-known as the first Black Bachelor lead of The Bachelor.