Rachael Ray is a budding actress, celebrity cook, author...But she is not a chef! She cuts onions like any normal person. Rachael is a career-oriented woman hence career comes first before family. She is married since 2005.

There were rumors of Rachael and her husband John’s divorce. Those divorce rumors turned out to be false. Hence, she is happily married.

Rachael Ray is married to John Cusimano, a lead singer and an American lawyer on September 24, 2005.

The couple has had no children till now. When asked about the plan of having any child, she says that she is not prepared and couldn’t be a good mom she says that “I just feel like I would do a bad job if I actually took the time to literally give birth to a kid right now and try and juggle everything I’m doing.”

Rachael Ray is a career-oriented lady and says career comes first before family! 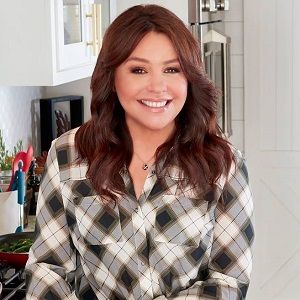 I’ve never been a huge sweets eater, and I’ve always loved a Mediterranean diet. We eat a lot of dark leafy greens, and a couple meals each week are meat-free. We enjoy eating a balanced diet.

The most essential part of my day is a proper dinner.

My dream job is to be a rock drummer and the alternate drummer for the Foo Fighters.

a tablespoon is a full palm of dried spices.

You don’t feel as self-conscious if your clothes fit.

Who is Rachael Ray?

She is famous for her cooking recipes in various magazines and cooking shows. She also has three Food Network series attributed to hear names such as 30-minute meals, Rachael Ray’s Tasty Travels, and $40 a day.

Her parents were the owners of a restaurant, The Carvery. However, after selling the restaurant, her mum and dad divorced. After the split, she and her siblings lived with their mother in New York.

She has an elder half-sister, Maria Betar, and a younger brother, Manny. Her sister Maria creates and writes the recipes for her website/blog.

Ray was close to her grandfather and she often talks about him during interviews. Her aunt, Geraldine Scuderi, 77 died due to an accident.

Their family moved to Lake George, New York when she was eight years old.

Ray graduated in 1986 from Lake George Junior-Senior High School and later went to Pace University to complete her education. She was also a cheerleader in her high school.

Her mother managed restaurants in New York’s Capital District, including a Howard Johnson’s located across the street from Gaslight Village.

Ray worked at the candy counter at Macy’s in the fresh food department. She came with the concept of 30 Minute Meal which says that the recipe can be completed within 30 minutes. Ray was influenced in cooking by her maternal grandfather, Emmanuel Scuderi, and her Cajun ancestry.

Whenever asked about her cooking she says that she is not a cook and is completely unqualified for the job. The Oxford American College Dictionary announced the addition of the term EVOO (extra-virgin olive oil) which Ray has popularized.

Apart from this, Ray has also hosted the show in Food Network named 30 Minutes Meal for its 27 seasons till 2012. She is also the host of the show Rachael Ray which is a syndicated tv talk show.

Ray posed for FHM which is a men’s magazine in 2003. Her magazine Every Day with Rachael Ray was launched by The Readers Digest Association. Ray can also be seen posing inboxes and commercials of Nabisco Products. In 2008, another show Rachael’s Vacation was premiered. The same year. Ray became the executive producer of the Latin cooking show Viva Daisy in Food Network. Later she became the team caption of the reality series Rachael vs. Guy: Celebrity Cook-Off.

Rachael Ray is also actively seen on many products endorsement including Westpoint home sheets, blankets, and coverlets designed by her. Ray was also the celebrity endorser of Dunkin Dunots basically of its coffee products.

Her recipe was also available on AT&T cellular phones. In 2008, Ray created the recipe for pets as well. All the profit from the product goes to Rachael’s Rescue, which is a charity for helping risky animals.

Apart from that, Ray has also established a non-profit organization named Yum-O!, which helps to educate people about the importance of nutrition. Ray has also been nominated for Daytime Emmy Award for Best Outstanding Talk Show every year till 2013 and won it three times.

Keeping herself busy with all kinds of recipes, television appearances, and endorsement work, Ray has made a total net worth of $100 million as of 2022.

Although her yearly salary is not disclosed.

Rachael was suspended from Girls Scout for making dirty lyrics to a Girl Scout song, not wearing the full uniform, and quarreled with one of the members where she broke her arm.

In March 2017, her dog food company was sued to accuse the brand’s labels of misrepresenting.

She was criticized for promoting unhealthy Dunkin’ Donuts.

Moving Towards Rachael Ray’s body measurements, she has a good height of 5 feet 2 inches (1.60m) with bodyweight 64 kg. She has dark brown hair color and her eye color is also dark brown.

She has an apple-shaped body of 37-28-38 inches. Her dress size is 8 and her shoe size is 8.5. Also, she has had a naturally raspy voice since childhood.

Is Rachel Ray a real chef?

Does Rachel Ray have kids?

Is Lidia Bastianich a trained chef?