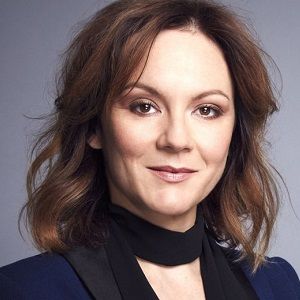 I keep thinking, 'when will it all blow up? When will the luck or whatever it is run out?' Then there is the fear that there is someone behind me asking, 'Who does she think she is?' So I'm waiting you might say. Waiting for the jinx and trying not to feel too lucky.

I am a clever girl, so if there was something else I could do, I would.

Rachael Stirling is a married woman. She dated Oliver Chris from the year 2007. They were engaged until 2012. But their relationship ended. On 3rd June 2016, she married Guy Garvey who is a musician. Similarly, they have a son named Jack who was born in April 2017.

Rachael with her current spouse and son is living a happy life.

Who is Rachael Stirling?

Rachael Atlanta Stirling known as Rachael Stirling is an English stage, film and television actress. Similarly, she has been nominated twice for the Laurence Olivier Award for her stage work. She is known for playing Nancy Astley in the BBC drama Tipping the Velvet, and Millie in the ITV series The Bletchley Circle.

She was born on 30th May 1977 in London, England, UK. She is the daughter of Archibald Stirling and Diana Rigg. Her mother is an actress and her father is a theatre producer. Similarly, she has three brothers Ludovic Stirling, David Stirling and William Stirling.

Her nationality is British but her ethnicity is unknown.

Talking about her education, she attended Wycombe Abbey School. Similarly, she graduated with a BA in art history from the University of Edinburgh, where she performed with the Edinburgh University Theatre Company.

She made her first major appearance on stage in the year 1996 as Desdemona in the National Youth Theatre revival of Othello at the Arts Theatre opposite Chiwetel Ejiofor in the title role. Similarly, a year later at the Arts Theatre with the NYT, she played Olive in the female version of The Odd Couple. In the year 1998, she portrayed Kate in Dancing at Lughnasa for NYT at the Arts.

Similarly, she starred onstage in The Priory directed by Jeremy Herrin at the Royal Court Theatre in the year 2009. She starred as Lady Chiltern in a 2010 production of An Ideal Husband at the Vaudeville Theatre. Moreover, her first screen appearance was in the 1998 British comedy film Still Crazy.

Likewise, Rachael Atlanta has played roles in films like Maybe Baby, Redemption Road, Complicity, Another Life, The Triumph of Love, and many more.

Her first break in television was in the 2000 NBC miniseries, “In the Beginning” which was adapted from Genesis. In the year 2011, she starred in the BBC Four adaptation of D.H. Lawrence’s Women in Love as Ursula Brangwen. Further, she portrayed Millie in both series of the ITV mystery drama The Bletchley Circle in 2012 and 2014.

In 1999, she won the EFP Shooting Star awards. Similarly, in 2003, she won Best Actress award for Tipping the Velvet. She was nominated for RTS West Television Award in On-Screen Performance for Sixteen.

She is earning a huge amount of money from her career. But she has not disclosed her salary and incomes. The estimated net worth of Rachael is around $4 million.

Talking about Rachael Atlanta’s body measurements, she has a height of almost 5 feet 9 inches and her weight is unknown. She has dark brown hair and dark brown color eyes as well.