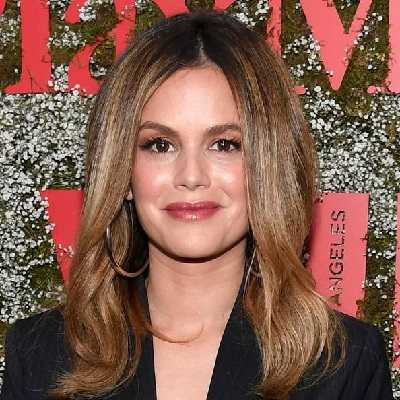 Dating co-stars is natural. When you're working with someone, it's habit.

Having kids is something I want to see in my future - I hope.

All I can say is, I don't talk about the personal stuff. It's the one thing you can keep to yourself. At least you try to.

What is the relationship of Rachel Bilson?

Rachel Bilson is in a relationship. She confirms her new boyfriend Zac LaRoc of 2 years after her split from Bill Hader. She confirmed her relationship with Zac in May 2022.

Previously, she was in a relationship with the Canadian actor, Hayden Christensen. They started dating each other in 2007. Later, on 25th December 2008, they even got engaged to each other.

However, their relationship went through a rough phase as got separated in mid-2010. A few months later, they started dating each other once more.

On October 29, 2014, they welcomed their daughter, Briar Rose Christensen. After several years of relationship, they spilled from each other.

Later, she dated the actor, Bill Hader for some time period. However, they broke up each other after some months of dating.

But the private couple split up just seven months after in July 2o2o.

Who is Rachel Bilson?

Rachel Bilson is a 3X Teen Choice Award-winning actress. She is renowned as Millie of Jumper, Summer Roberts of The O.C., and Kim of The Last Kiss.

Last, in 2019, she appeared in the TV Movie, Lovestruck as Daisy Valentine.

Rachel Bilson was born on 25th August 1981 in Los Angeles, California in a showbiz family. She is of Mixed (British, Italian, and Jewish) ethnicity.

Her father, Danny Bilson is a filmmaker by profession. Also, her mother, Janice Stango is a sex therapist. Janice’s ancestry was originally hailed from Italy. Her parents married in 1980. After ten years of marriage, they divorced in 1990. In 1997, his father, Danny remarried Heather Medway.

His grandfather, Bruce Bilson was a producer and director. Also, my great grandfather, George Bilson used to work in RKO Pictures. She has an elder brother, John, and two half-sisters, Rosemary and Hattie.

Rachel Bilson started her career through advertisements and commercials. In 2003, she made her acting debut with the TV series, Buffy the Vampire Slayer as Colleen. However, her role in the series was limited to a single episode.

After that, she was featured in the TV series, The O.C. In the romantic-comedy drama, she portrayed the character of a popular socialite, Summer Roberts. Initially, the character was supporting. Due to her performance, the character became equally important. The series became one of the milestones in her career.

Following the series, she made appearances in various movies. Some of her movies of the time include Waiting for Forever, Jumper, L!fe Happens, and The to Do List.

In 2011, he featured the series, Hart of Dixie with the leading character Zoe Hart. The entire series revolved around her. The series’ final season was aired in December 2014. The season had 1.64 million viewers. For the series, she was nominated for a Teen Choice Award.

After the series, she featured the series, Nashville as Alyssa Greene and Take-Two as Sam Swift. In 2019, she appeared in the TV movie, Lovestruck as the lead character, Daisy Valentine.

Besides acting, she is also popular for her fashion sense and is also recognized as Fashion Junkie. Hence, she is approached by several brands to represent them. Some of the fashion brands she endorsed include DKNY and ShoeMint.

As of 2022, she has an estimated net worth of $12 million. His earnings as an actress are in the range of $21k to $215k. Besides that, she also makes it through her brand endorsement.

Her net worth includes the house that she brought in 2017 worth $3.3 million. Also, she brought a home worth $2.7 million in Sherman Oaks, California along with her former partner, Hayden.

Rachel Bilson has brown eyes with brunette hair. She stands at a height of 5 feet 2 inches and 55 kg. Her body measurements are 33-24-35 inches. Also, she wears shoes of size 5 (US).

Some rumors were going about her budding relationship with her co-star, Bill Hader. The rumors started when they were spotted at the coffee date in Hader’s hometown, Tulsa, Oklahoma.

Later, they also walked on the red carpet at the Golden Globes together. However, in July 2020, there is some news that suggested that they are no longer together anymore.