Rachel Bradshaw is an American Country Music Artist and Celebrity Daughter. She is married to Rob Bironas.

Rachel Bradshaw was married to a late American Football Placekicker, Rob Bironas. The couple got married on June 24, 2014, in the presence of close friends and family. They dated for two years before tying a knot.

Just after the 3 months of their marriage, Rachel tragically lost her loved one in a car accident in Nashville, Tennessee. Currently, she is single. 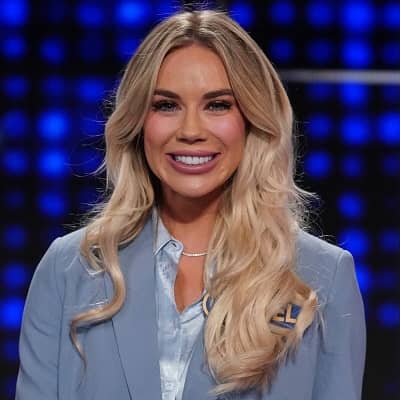 Who is Rachel Bradshaw?

Rachel Bradshaw is an American Country Music Artist and Celebrity Daughter. Additionally, she gained immediate hype after singing the National Anthem at the opening of a Seattle Seahawks-Dallas Cowboys’ game in 2019.

Furthermore, she is best known as the daughter of famous former professional football player and actor, Terry Bradshaw and his third ex-spouse, Charlotte Hopkins.

Rachel’s father, Terry Bradshaw is a well-known football player and actor. Likewise, her mother Charlotte Hopkins was the third of his father. Her parents divorced when she was 12 years of age. She enjoyed her childhood from her father’s earnings and comfort. She has a younger sister named Erin Bradshaw and a half-sister, Lacey Hester. In 2009, her half-sister, Lacey lost her older brother to a drug overdose.

Likewise, she is of American nationality and falls under the Virgo birth sign. Furthermore, she was educated at Belmont University.

Rachel Bradshaw has dreamt to become more popular than her father. Even though she has not followed the footstep of her father, she chose to mark herself in the world of music.

Rachel became widely popular after singing the National Anthem at the opening of a Seattle Seahawks-Dallas Cowboys game in 2019. The world came to know that she had such an angelic voice that was hiding behind the cameras all this long. Moreover, in 2007, she was a member of a reality show, Nashville, a home of country music.

She has not revealed much about her financial status. However, being a musical artist she should have earned a hefty amount. Anyway, her father has a pretty impressive net worth.

Similarly, her father has an impressive net worth of over $5M as of 2022.

Bradshaw prefers to keep herself away from the spotlight. Therefore, she has never been stuck in any controversies and rumors.

Rachel is a 34-year-old beauty with an amazing personality. She has a height of 5 feet and 7 inches. Likewise, there are no details about her weight and body measurement. Looking at her pictures, she has beautiful blue eyes and blonde hair.