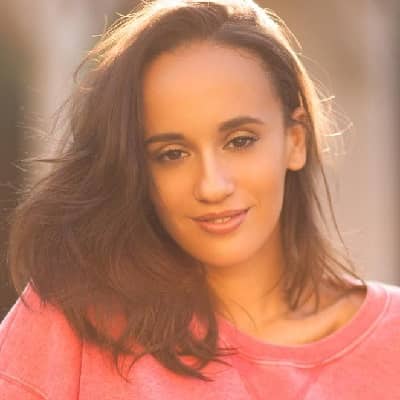 Rachel Brown has not yet shared any details regarding her love life. However, it seems she is in a relationship with a guy named Marc Lohan but it is not confirmed. Also, Rachel has never spoken about Marc in the media.

Who is Rachel Brown?

Rachel Brown is an American well-renowned musician, singer, and songwriter. She is the best know for her song titled “Bumblebee”.

Rachel’s birthday falls in the month of April. However, she hasn’t yet disclosed her birth year and date in the media. She was born and raised in New York City and obviously, she holds American citizenship.

Rachel is the daughter of an American well-known fashion designer Amsale Aberra and Neil Brown, a film executive. Her father is a native of New Jersey with Bermudian and South Carolinian roots whereas her mother is of Ethiopia.

On April 1, 2018, her mother passed away due to uterine cancer at the age of 64. She is the only child of her parents. Likely, she is of mixed ethnicity (Ethiopian, Bermudian, and Southern).

Talking about her academics background, she attended Hunter College High School in New York. Afterward, he joined Harvard College where she studied filmmaking. She was selected as one of Harvard’s “15 Most Interesting Seniors” by The Harvard Crimson, a newspaper of Harvard University.

Rachel started playing guitar in the gap year between her high school and college. In her spare time, she taught herself to play and writes songs. In 2009, she made her first performances at an open mic night at Chewstick’s neo-griot lounge in Bermuda.

That performance led to her performing later that summer at the Bermuda National Stadium where she opened for R&B sensations Robin Thicke and Mary J. Blige in Bermuda. In October 2009, she opened for John Legend in the Bermuda Music Festival.

Rachel released her debut EP “Building Castles” in 2012 which includes the single, “Bumblebee”. The track was featured in a Robbins Brother’s diamond ring commercial and by Jay Leno in his opening monologue on The Tonight Show. Similarly, she releases the follow-up Ep “The Band” in 2015, recorded live at the Bunker Studio in Brooklyn, NY.

To date, Rachel has managed to maintain a clean image in the media. She hasn’t faced any disputes and scandals till now.

Rachel might have accumulated a decent amount of fortune throughout her successful career. But, she has not revealed her salary, net worth, and other assets in the media.

The musician has a pretty brown pair of eyes and brown hair as well. She has a fair complexion. Further, there are no details available regarding her body measurement including height and weight.

Rachel has a verified Facebook page with nearly 42k followers. Likewise, she is active on Instagram and Twitter where she has over 9.9k followers and 1.6k followers respectively.

She is also available on iTunes. Rachel has a self-titled YouTube channel with more than 2.86k subscribers where she uploads her cover songs and vlogs.