Rachel Burden is currently in a married relationship. She exchanged vows with Luke Mendham in Sep 2004.

Her husband is a journalist and has an Irish passport. Their wedding took place in Buckinghamshire, United Kingdom and they’re now parents of four children.

Their daughters are Rose Mendham & Alice Mendham, and their sons are Sam Mendham & Henry Mendham. 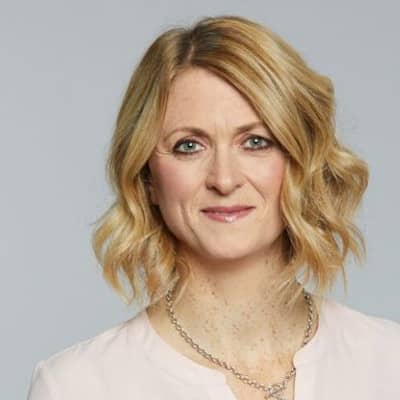 Source: On the radio

Who is Rachel Burden?

Rachel Burden is a British radio newsreader and presenter. She is currently presenting a weekday breakfast show at BBC Radio 5 Live.

She was born on 22 Jan 1975 in Marlow, United Kingdom. The name of her mother is not disclosed and her father’s name is Paul Burden.

Paul used to work for BBC and is now retired. Rachel’s ancestry is English and is the only child of her mom & dad.

Talking about her academics, she first went to Wycombe High School from 1987 till 1993. She joined Trinity College and then enrolled at Cardiff University to study broadcast journalism.

Rachel Burden started to work with Radio 5 Live in 2003. Then in May 2011, she began hosting a weekday breakfast show that was previously hosted by Shelagh Fogarty.

For her work, she has visited several places. She went to Rome, Dublin, Kenya, New Zealand, and South Africa. In the BBC Breakfast television program, she started as a presenter in Aug 2015.

Rachel also worked for around 15 months with BBC Radio Suffolk.

This radio star is keeping herself away from rumors and is also not surrounded by any desperate scandals.

Regarding Rachel Burden’s body features, her height is 5 ft 6 inches and her body weight is average.

Moreover, her eyes are grey, her hair is light brown, and has a fair skin complexion.

Rachel is available on social sites. She has Instagram and Twitter accounts with more than 9.8k and 80k followers respectively.

But she is also active on the Facebook platform with more than 73k followers.