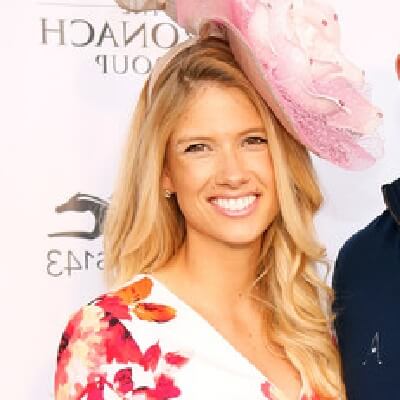 Rachel Glandorf McCoy is a married woman. She is married to Colt McCoy. He is an American football quarterback for the New York Giants of the NFL. He has previously played for the Cleveland Browns, San Francisco 49ers, and Washington Redskins.

The couple first started dating when she was an intern at KEYE TV in Austin in the summer of 2008 and McCoy was the Longhorns starting quarterback. Rachel was a journalist and interviewed Colt but started dating shortly after meeting.

On January 12, 2010, McCoy proposed to her on the video scoreboard at Darrell K Royal-Texas Memorial Stadium in Austin. The same year, the couple exchanged wedding vows on July 17, 2010.

Who is Rachel Glandorf McCoy?

Rachel Glandorf McCoy is a former American middle-distance track and field athlete for Baylor University. She is famous as the wife of the American football quarterback, Colt McCoy.

Rachel Glandorf McCoy was born in Los Angeles, California, on June 15, 1987. As of 2020, her age is 33. She was born to parents Steve Glandorf (father) and Liisa Glandorf (mother). McCoy is one of her parents’ two children and has a younger brother named Josh.

She spent her childhood days in Los Angeles with her family and her ethnicity is Caucasian.

Talking about her educational background, Rachel went to Vail Christian High School in Edwards, Colorado from where she graduated in 2007. After that, she joined Baylor University where she played as a middle-distance track and field athlete.

Rachel Galndorf McCoy is a former track and field athlete. She started playing from her high school days in Vail Christian where she earned all-state conference honors. In her junior year, Glandorf finished second in the state in 800 meters.

In her sophomore and senior seasons, she ran to a third-place finish in the state in each season. Moreover, she also became the Year’s Western Slope Sportsman in her senior basketball season.

In addition to track, she played basketball and volleyball but the track was her best sport. At Baylor University, she competed in the 400-meter hurdles and finished fifth in the event at the Dr. Pepper Invitational and 9th at the North Texas Invitational as a sophomore in 2007. Furthermore, she has also worked as a journalist as an intern at KEYE TV.

However, the main reason for her fame is her marriage to Colt McCoy who is an American football quarterback for the New York Giants of the NFL. He has previously played for the Cleveland Browns, San Francisco 49ers, and Washington Redskins.

McCoy stands a height of 5 feet 8 inches and weighs around 52 kg. In addition to this, she has an attractive body shape with measurements, 33-24-34 for breasts, waist, and hips and wears a bra size of 33D. She has blonde hair and blue eyes.

The couple lives in a luxurious house in Austin worth over $5 million and also owns a Range Rover and BMW X6 M Tycoon.

Rachel has not been involved in any controversies. She has been able to keep herself away from any type of controversy and scandal. So far, she has not done anything controversial in her career. She has kept her profile clean and has simply focused on her career and personal life.

Rachel is not active on social media sites. She has chosen to remain private regarding her personal life and does not have accounts on Facebook, Twitter, and Instagram.

You may also like to read the Bio, Career, Net Worth, Social Media, and more about Sarah Logan, Bonnie Pointer, Alex Michel, and more.