Blogger Rachel Hollis is married and a mother of four.

Rachel Hollis is a married woman.

The duo met for the first time when she was working at Miramax and instantly they became best friends. 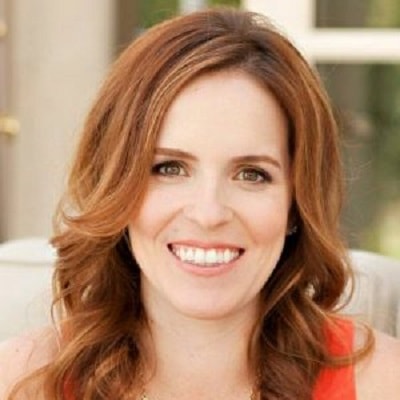 I started my blog after I caught my Thanksgiving turkey on fire. Seriously. I was a wannabe domestic goddess armed with a printout from MarthaStewart.com.

The recipe called for a brine and a cheesecloth… I’d never used either. The brine involved white wine, the giant turkey pushed the cheesecloth right up to the top of the flaming hot oven, the results were tragic.

After I recovered from that disaster, I decided someone else needed to show me how to do things.

I wanted to try making things that were cool, but not fancy. I wanted to cook food that was delicious, but achievable. I wanted to figure out what to wear, but I couldn’t afford anything beyond the clearance rack. Also, I needed to accomplish these things in a reasonable amount of time. When I couldn’t find the type of content I was looking for, I decided to try and create it myself. I’m thrilled to report that I haven’t lit any poultry on fire since this site.

Who is Rachel Hollis?

Rachel Hollis is an American author, blogger, and motivational speaker.

She gained fame as the founder of the lifestyle blog TheChicSite.com and CEO of rising.

Previously, she was a food blogger and owns The Hollis Company.

She was born on January 9, 1983, in Weedpatch, California, the United States.

Rachel was born to Farrell Neeley and Sheree Edwards.

Also, she has a brother named Ryan Neeley as her sibling and her grandparents were Okies who used to pick cotton to support their six children.

Rachel holds American citizenship but her ethnicity is Caucasian.

She attended the high school of her community in California and graduated from there.

Then, she achieved her undergraduate degree from the American Academy of Dramatic Arts located in Los Angeles, California.

Initially, she worked in the Miramax company in the starting days, and she thought of establishing her own company, Chic Events.

She is the founder and the CEO of that company.

Similarly, Rachel was also ranked as the Top 30 Entrepreneurs Under 30 and also named the Tonny Robbins for Women. Likewise, she has worked with famous brands such as Junior, Sprint, Rubbermaid, Walmart, Disney, and so on.

Moreover, Rachel Hollis has made her appearances on the programs like The Rachel Ray Show, The Talk, and Extra.

In addition, she is also an author, and her book Girl Series which includes ‘Party Girl’, ‘Sweet Girl, and Smart Girl’ is the best-selling book.

Also, she wrote the book named Girl, Wash Your Face which was rated as the Top 10 Best Selling Books.

She has been named the Tonny Robbins for Women. Apart from that, Rachel has not been awarded or nominated for her work to date.

She has an estimated net worth of around $ 1-5 million and she has earned that sum of money from her professional career.

She is being accused of plagiarizing some of her Instagram posts.

Some comments on her post resemble that she copied the quote.

Rachel Hollis stands at a height of 5 ft. 7 inches and weighs 64 kg.

Also, her body measurement is 35-25-35 inches and she has blue eyes and blonde hair.