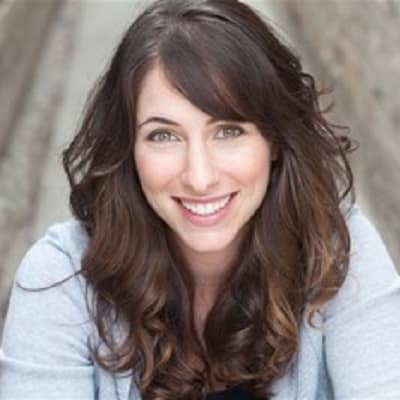 Rachel Lewis is married to Larry Bates. Her husband Larry is an award-winning actor.

Their wedding was in Sep 2015 at The Woodlands at Cottonwood Canyon.

The duo has various pictures together on their social media accounts. Rachel calls Larry “Armand” in her different posts. They seem to love traveling and have visited various places together.

Who is Rachel Lewis?

Rachel Lewis is an Emmy nominated writer, comedian, producer, actor, and voice-over actor. She has worked for movies like Odd Squad (2014), Helpsters (2019), and The Jon and Eddie Show (2009).

Rachel has maintained a low profile when it comes to her personal life. The information about her birth date is also not known. Her birthplace seems to be in Bozeman, Montana, US.

She often posts different pictures with her siblings but their names are unknown. Likely, the details regarding her parents are also still under certain.

The writer is of American nationality and has English descent.

Rachel graduated from the University of Wisconsin Madison with a degree in Theatre and Drama. Furthermore, she also has her training from Second City and IO.

Rachel started her career working as a television staff writing job on the live-action comedy kids show “Odd Squad”. She has worked on various shows like Amazon, Dreamworks AnimationTV, and PBS as a writer.

Rachel met Alex Fox in Chicago performing improv and sketch comedy at the world-renowned Second City, iO, and Annoyance Theaters. Their friendship and the comedic partnership grew along with their through their complementary humorous stylings.

The duo thought of teaming up together and has worked together on various projects. In 2010, The Friars Club of New York named The Jon and Eddie Show one of the Top Five Improv Groups in the nation.

They have sold two original shows to Nickelodeon and also teamed up with Nerdist Industries. Furthermore, they have also written for BIZAARDVARK on The Disney Channel, THE STINKY & DIRTY SHOW and DANGER & EGGS on Amazon, and VAMPIRINA on Disney Jr.

Their recent work is writing and producing Helpsters, a delightful new show featuring puppets and comedians, streaming on Apple TV+.

Moreover, they are 2020 graduates of the prestigious WGA Showrunner Training Program.

The writer earned an average of around $60,000 annually and so she also must have amassed a good amount from her career. However, her net worth is still under review.

The star has maintained a low profile and doesn’t prefer to be involved in any such activities that lead her name to appear in any rumors and controversial news.

Rachel seems to have an average height and body mass. Although its exact measurement is not disclosed.

Similarly, she has dark brown hair with hazel colored eyes.

She has provided the “[email protected]” Gmail for contact and business purposes.