Updated On November 15, 2022 | Published By: Paristha Acharya
Share this
In Relation 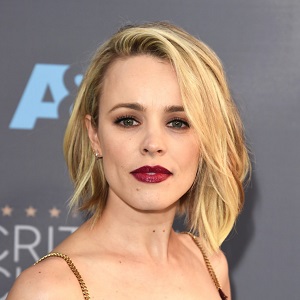 The physical part of comedy is as hard as a lot of action movies. It scares me, but in a way that I like

I've discovered as I've grown up that life is far more complicated than you think it is when you're a kid. It isn't just a straightforward fairytale

My mother never put an emphasis on looks. She let us grow up on our own time line. She never forced any beauty regimen into my world.

What is the relationship of Rachel McAdams?

She has been in a relationship with Canadian music manager Patrick Sambrook since 2013 and ended relation in 2014.

In 2016, McAdams began dating American screenwriter and director Jamie Linden. The couple has been together for more than five years. Similarly, the two together shared a child, a baby boy.

Who is Rachel McAdams?

Rachel McAdams is a Canadian actress best known for her roles in ‘Mean Girls, ‘The Notebook’ and ‘Wedding Crashers.

She worked in Canadian television and film productions such as the drama film “Perfect Pie” (2002) for which she received a Genie Award, the comedy film My Name Is Tanino (2002), and the comedy series Slings and Arrows.

Rachel McAdams was born on November 17, 1978, in London, Ontario. Her nationality is Canadian and her ethnicity is mixed(English, Welsh, Irish, and Scottish).

She is the daughter of Sandra Kay a nurse and Lance Frederick McAdams a truck driver and furniture mover. She grew up in a Protestant household. When she was four years old, she began figure skating and won many regional awards in the sport.

Even though she was very skilled at skating, she never considered it to be more than a hobby.

She developed her interest in acting as a child and attended Disney and Shakespeare summer camps. She has also appeared in the Original Kids Theatre Company, London productions.

She attended the Myrtle Street Public School before joining the Central Elgin Collegiate Institute. Rachel participated in sports and served on the student council.

She joined the four-year theater program at York University and graduated with a Bachelor of Fine Arts honors degree in 2001.

She made her movie debut in the 2002 comedy film ‘My Name is Tanion’, an Italian-Canadian co-production. Her first Hollywood movie also happened in 2002.

She played a high school student in “The Hot Chick” whose body is magically swapped with that of a criminal. She got her first big breakthrough in 2004 when she was selected to play Regina George, a beautiful but manipulative teenager in ‘Mean Girls’.

The film was a huge commercial hit and she was highly praised for her role. She was flooded with film offers following the success of “Mean Girls”. She played the role of Allie Hamilton in “Notebook” in 2004 which also starred Ryan Gosling.

The movie did well at the box office and received many awards. She played Clare Cleary, an environmental activist in the romantic comedy “Wedding Crashers” in 2005.

The movie became a huge hit reaching No.2 at the box office on its first weekend. She acted in two films the same year: ‘The Red Eye’ and ‘The Family Stone’.

Rachel had become very popular by now and was in much demand. She was invited along with Scarlett Johansson and Keira Knightley to appear on the March 2006 cover of ‘Vanity Fair’. She took a short break from acting during 2006 and most of 2007.

Rachel got several lucrative movie offers which she turned down. She returned to the big screen in late 2007 with the movie ‘Married Life’ in which she played Kay.

The year 2009 was a very productive one for her. She acted in three films, ‘State of Play’ a political thriller, ‘The Time Traveler’s Wife’ a romantic drama, and the action-mystery ‘Sherlock Holmes’. She portrayed a television producer Becky Fuller in ‘Morning Glory’ (2010).

In 2011, she starred in Woody Allen’s ‘Midnight in Paris’ in which she played the role of Inez. She appeared in three movies in 2012: the Vow’, ‘Passion’ and ‘to the wonder’. Her upcoming films include ‘A Most Wanted Man’ and other untitled projects.

As of 2022, Rachel’s net worth is $16 million and there is no information about salaries.

Rachel McAdams and Taylor Kitsch were rumored to be dating and keeping it private.

According to a new rumor, Rachel McAdams will play Night Nurse in Marvel’s Doctor Strange.

According to rumor, Rachel starring role opposite of Benedict Cumberbatch in the highly anticipated Marvel film, which is slated for November 4, 2016.

Shocking break-up of Ryan Gosling and Rachel McAdams. More about their relationship and dating history