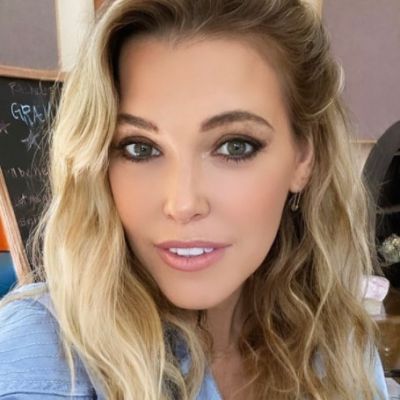 Who is Rachel Platten married to?

Rachel Platten is happily married to her husband Kevin Lazan.

They tied the knot on July 31, 2010, in a Jewish wedding ceremony. Southern New England Weddings magazine feature their wedding pictures in 2010.

They are parents to two daughters named, Violet Skye and Sophie Jo. The first daughter, Violet was born on January 26, 2019, while their second daughter Sophie Jo, was born on September 9, 2021.

Who is Rachel Platten?

Rachel Platten is a popular singer, and songwriter-author. She is best known for her albums like Be Here, Wildfire, Fight Song and Solo album, Broken Glass, Soldiers, Stand By You, and Better Place.

She is the winner of the Daytime Emmy Award for a live performance and the iHeart Radio Music Awards.

She is of mixed ethnicity and as per the horoscope, Taurus is her birth zodiac sign. She is a Jewish.

Platten is the daughter of Paul and Pamela Platten. She was brought up in Newton Centre, Massachusetts with her younger sister named, Melanie.

She went to the Mason-Rice Elementary School. She studied at Buckingham Browne and Nichlos high school. Late, she enrolled at Trinity College and studied political science, and graduated in 2003.

After graduation, Rachel Platten went to Greenwich Village, New York City, and recorded demos. She worked in a Prince and Sly and the Family Stone cover band named, Dayz of Wild.

In the beginning, she worked as a jingle writer, Estee Lauder salesperson, and waitress. She did the solo music near the village and started to tour all over the country.

Likewise, she collaborated with various charities including Music Unites, Ryan Seacrest Foundation, Live Below the Line, and Musicians on Call.

She worked as a supporting singer in 2015 on The Good Guys and A Girl Tour. She was in the “Girls Night Out, Boys Can Come Too Tour” along with Christian Perri and Colbie Caillat.

She performed the opening act on Las Vegas Show in Faith Hill, Tim McGraw’s Soul2Soul: The World Tour, and the other two Los Angeles shows in 2017.

Rachel Platten was featured as a model in a clothing band, Aereis’s promotion campaign in January 2018. In May 2018, she was featured on the cover of the magazine, The Improper Bostonian.

As per Celebrity Net Worth, Rachel Platten has an estimated net worth of around 9 million USD. Platten’s salary and income are not disclosed yet.

Rachel Platten has not been involved in any serious rumors and controversies up to date as she is able to maintain a clean profile up to date.

Coming towards her body measurements they are 25 inches waist size, 33 inches bust, and hips size. Her shoe size is 9(US) while 6 (US) is her dress size.

Being a famous singer, Rachel Platten is a social media star as well.

Likewise, there is an official Facebook page under her name, which has garnered about 650K followers whereas she is active on Tiktok under the username, @rachelplatten which has around 3.1 million followers.

She also has a self-titled youtube channel, having 1.84 million followers.