Updated On January 29, 2023 | Published By: Paristha Acharya
Share this
Married 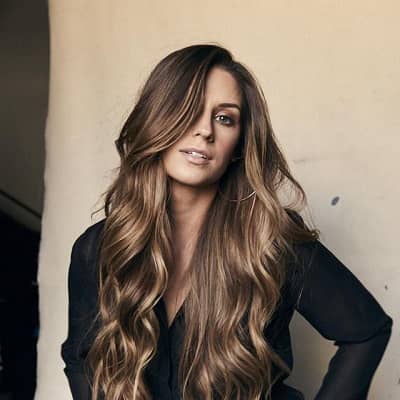 By the time that I left Gloriana, I didn’t really have a true sense of who I was as a person without all of that. This was sort of a reawakening.

It was really a time to discover myself, both creatively and personally.

What is the relationship of Rachel Reinert?

Rachel Reinert is a married woman. She exchanged her vows with her longtime boyfriend, a musical artist Caleb Crosby on 30 August 2019.

Their wedding was an intimate ceremony with just 13 guests, held on Tennessee Treehouse.

Reinert walked down an aisle with her father in a ‘70s-inspired Rue De Seine dress that featured bell sleeves, a train, and beading.

Who is Rachel Reinert?

Rachel Reinert is an American singer, instrumentalist, and songwriter. She is best known as a former member of the country music group Gloriana, and as a singer of Dark Star.

This singer was born on 10 March 1989, in Florida, the US. Her father‘s name is Scott Reinert. She hasn’t shared details about her mother.

Rachel has three brothers, one of their name is Matt. She belongs to German descent.

She studied musical theater in Orange Country School of the Arts.

Rachel Reinert was interested in music and arts from her childhood. At the age of 14, she learned playing guitar and started turning poems into songs. She began recording demos with her teacher’s help and was signed to a publishing deal at Nashville at 15 years old.

After high school, she moved to Nashville and worked on her songwriting skills. In 2008, Reinert began a journey that changed her life. She along with Tom and Mike Gossin and Cheyenne Kimball founded a music band named Gloriana.

The album was a big hit and it charted #2 on Top Country Albums and #3 on Billboard 200. The band went on the 2009-2010 Fearless Tour with Taylor Swift. In 2010, Gloriana won the Academy of Country Music Award for Top New Vocal Group.

Wild At Heart was certified as Gold by RIAA on 18 August 2010. Afterward, in 2011, Cheyenne announced that she was parting ways with the group.

The same year, Gloriana released their highest rating single (Kissed You) Good Night, which was certified Platinum and gained huge popularity. Later, they even performed this song on ABC’s The Bachelorette on January 13, 2012.

They also released several hit songs like Wanna Take You Home, Can’t Shake You, Best Night Ever, and Trouble. Between 2011-2015, this band released two albums named A Thousand Miles Left Behind, and Three.

In 2016 January, she left the band and made a decision to continue as a solo artist. Afterward, she released her debut solo single Cool in 2018.

Later, on 13 March 2020, Rachel released her debut album Into the Blue, which includes her 11 songs like Dark Star, Secret, King of Hearts, Cool, Kiss on the Cheek, and more.

Rachel Reinert: Salary and Net Worth

The salary of Reinert is under review. Meanwhile, according to some sources, she has an estimated net worth of $14 million as of 2022.

Is Rachel Reinert involved in any rumors and controversies?

Earlier, there was a rumor that Rachel was dating radio deejay Bobby Bones. After, she left her band Gloriana, rumored were that she stepped out and was done with music.

Apart from this rumor, she is doing great in her career.