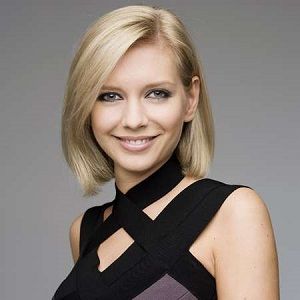 People have got their opinions, and you can't please everyone.

It's always flattering when you get compliments, but it's more of a measure of who you are at the time than anything else.

I enjoy things that are relevant to me, like maths and science and 'Countdown,' and I don't want to offend our viewers.

We go to the banya, the Russian spa. And you go into the sauna, which is really hot, much hotter than a normal sauna, and then they beat you with branches.

What is the relationship of Rachel Riley?

Rachel has been with Pasha Kovalev for a while. Pasha is a professional Latin and ballroom dancer from Russia.

Rachel and Pasha met during the shooting of Strictly Come Dancing, a British TV show produced by BBC, in 2013. But they started dating only around September 2016.

They exchanged vows on 28 June 2019. Similarly, in May 2019, they announced on social media that they are expecting their first child. Then in Dec 2019, this couple welcomed their daughter, Maven Aria.

Rachel is heavily pregnant and expecting her second child with her husband Pasha Kovalev.

Rachel Riley met Jamie Gilbert at Oxford University where they completed their graduation. Jamie used to work in his father’s computer furniture firm Powerdesk. Rachel was only 19 years when they started dating.

They dated for around four and a half years but, broke up in 2009 temporarily. Sometime later after that, they managed to reconcile and started dating again.

They had a civil marriage on August 11, 2012, in the lavish surroundings of Hengrave Hall, Bury St. Edmunds.

With Rachel’s hectic work schedules and traveling, which kept her away from home, their marriage life started to fall apart.

Soon they grew apart and by November 2013, they made the announcement of their separation. Rachel claims that it was an amicable decision.

Who is Rachel Riley?

Rachel Riley is an English TV presenter best recognized for co-presenting Channel 4’s puzzle game show ‘Countdown’ as well as its comedy spin-off show ‘8 Out of 10 Cats Does Countdown’.

To date, she has also made guest appearances in a number of television programs, such as ‘This Morning ‘, ’12 Again’, ‘Pointless Celebrities’ and ‘Who Wants to Be a Millionaire?‘, to name a few.

Rachel Riley was born in Rochford, Essex, England on January 11, 1986. As of 2021, she is 35 years old. Her birth name is Rachel Annabelle Riley. Her father’s name is Christopher Riley and her mother’s name is Celia Riley.

She has a sibling namely, Alex Riley. Rachel holds British citizenship and her ethnicity is English. Her birth sign is Capricorn.

In which school did Rachel Riley attend?

Talking about Rachel’s education history, she was educated at the independent Thorpe Hall School, and Southend High School for Girls, a grammar school, where she obtained four As at A-Level.

Talking about her profession, Rachel Riley began her career in the financial sector. She interned at the Deutsche Bank, London. The experience of working there was an unpleasant one for her.

Due to the male-dominated environment and early morning work routine, she decided to leave the company.

After this, she joined a price comparison start-up company and worked there for some time before joining the television industry.

Besides that, her television debut came in 2009, when she joined Channel 4’s game show ‘Countdown’.

Despite having no specific training and prior experience, she replaced the long-serving presenter Carol Vorderman. From 2013 to 2014, she co-presented Channel 5’s ‘The Gadget Show’ alongside Jason Bradbury.

She next became a part of ITV’s ‘It’s Not Rocket Science. In this show, her co-presenters were Romesh Ranganathan and Ben Miller, both of whom had a background in mathematics and science.

In the year 2013, Riley also appeared as a contestant on the eleventh series of ‘Strictly Come Dancing’ with her dancing partner Pasha Kovalev.

However, Riley was eliminated in the 6th week of the show after she lost out in the dance-off against Aljaž Škorjanec and Abbey Clancy.

Till date, the English beauty has also made guest appearances on a number of TV programs, such as ‘Chris Moyles,’ Quiz Night’, ‘Celebrity Mastermind ‘, ‘Sunday Brunch’, ‘Pointless Celebrities’, ‘I Love My Country’, ‘Who Wants to Be a Millionaire’, ‘Virtually Famous’, ‘Saturday Kitchen’, ‘Dispatches’ and ‘Through the Keyhole’, to name a few.

There was a rumor about Rachel’s pregnancy. She has some great personal news to share with her social media followers.

She is pregnant. Rachel took to Twitter to make the baby news know to the world!.

What are the body measurements of Rachel Riley?

Rachel Riley has a height of 5 feet 5 inches. Additionally, she weighs is 57Kg.

Her hair color is blonde and her eye color is dull green. Her body measurements are 35-24-35 inches.