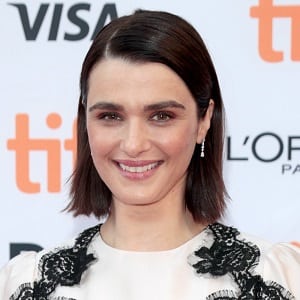 I found myself a sophisticated, educated American. He's not an actor. He's traveled the world. He knows where Europe is, unlike a lot of Americans. He's very cultured, but he's all man.

You just have to play every scene honestly and forget about a reaction and what the audience is going to think. I think the more seriously you take something, the more funny it might be.

God no! I hate it, absolutely hate it. I can't stand it, it's such a drag. So I just tend to wear the same things all the time. I don't like change anyway. - on shopping.

I'm not one for parties and stuff like that. I get a bit nervous around lots of people. Being invisible is what I really enjoy. That I find quite entertaining.

Rachel Weisz was initially in a relationship with English comedian, actor, and director, Ben Miller from 1991 to 1993. In addition, she dated English producer, actor, director, writer, and comedian, Dominic Anciano for about three years.

In 1997, she was in a relationship with American actor and producer, Alessandro Nivola.

From 1998 to 2000, Rachel dated English actor, media personality, and businessman, Neil Morrissey.  She was in a relationship with the American film director, screenwriter, and film producer, Darren Aronofsky from 2001 to 2010. The pair has a son named Henry Aronofsky.

Currently, Rachel is a married woman. She is married to American actor Daniel Craig. The pair married on June 22, 2011. The wedding took place in a private New York ceremony. They welcomed a daughter in September 2018.

Who is Rachel Weisz?

Rachel Weisz is a British-American actress. People mostly know her for roles in movies and television series like ‘Inspector Morse’, ‘Scarlet and Black’, ‘The Mummy’, ‘Enemy at the Gates, and ‘The Constant Gardener’ among others.

Additionally, she received the Academy Award in the category of Best Performance by an Actress in a Supporting Role for her role in ‘The Constant Gardener.’

Weisz was born in Westminster as Rachel Hannah Weisz on March 7, 1970. She was born to parents George Weisz and Edith Ruth.

Her mother was a teacher-turned-psychotherapist and her father is a mechanical engineer. Rachel became interested in acting and modeling as a child. She is of American and British nationality.

Furthermore, she belongs to a mixed ethnic background of Ashkenazi Jewish and Austrian-Italian.

Rachel Weisz initially appeared in the television film ‘The Advocates’ in 1992. In addition, the following year, she had roles in ‘Inspector Morse’, ‘Sweating Bullets’, and ‘Scarlet and Black.’ In 1994, Weisz played the role of Becca in the TV series ‘Screen Two.’

Some other movies and television series that Weisz has appeared in are ‘The Favourite’, ‘The Mercy’, ‘Disobedience’, ‘My Cousin Rachel’, ‘Denial’, ‘The Light Between Oceans’, ‘Complete Unknown’, ‘Youth’, ‘The Lobster’, ‘Oz the Great and Powerful’, ‘The Bourne Legacy’, ‘Dream House’, ‘The Deep Blue Sea’, ‘360’, ‘Page Eight’, ‘The Simpsons’, ‘The Whistleblower’, ‘The Lovely Bones’, ‘Agora’, ‘The Brothers Bloom’, ‘Definitely, among others.

Weisz has not revealed her current salary. However, she has an estimated net worth of around $30 million at present.

Weisz’s role in the movie ‘Disobedience’ was controversial as she played an Orthodox Jew in a lesbian relationship.

Additionally, she also became part of another controversy after she commented that it is acceptable for pregnant women to drink alcohol. At present, there are no rumors concerning Weisz and her career.